Germany allocates up to USD 40 million for bilateral development cooperation

In the coming two years the South Sudan-German bilateral development cooperation will focus on three priority areas: ‘Decentralisation and Accountability’, ‘Urban Water and Sanitation’ as well as ‘Food Security and the Development of Agricultural Markets’.

We are prepared to continue supporting the youngest country on the African continent [...].”
Ralf-Matthias MohsThe agreement was reached in Juba after two days of negotiations between representatives of the Government of the Republic of South Sudan and the Government of the Federal Republic of Germany on July 4 and 5. According to a press release by the German Embassy in Juba, the negotiations took place in an open atmosphere of constructive cooperation”.

Mohs stated that the signed document marked an important milestone in the development of the bilateral relations between the two nations. We are prepared to continue supporting the youngest country on the African continent develop a functioning administration, new economic opportunities and an infrastructure that will be able to meet the demands of the people of South Sudan,” he said. 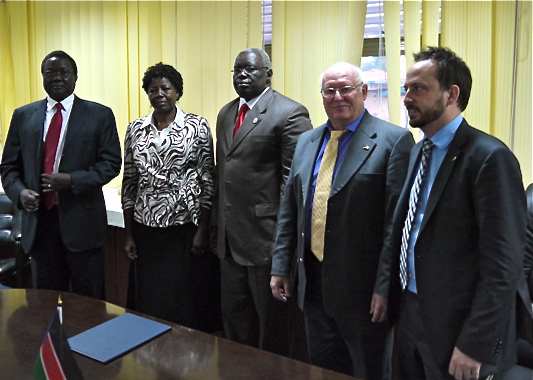 Representatives of both delegations after the agreement was signed in Juba, July 5.
© Embassy of the Federal Republic of Germany, South SudanHowever, the head of the German delegation also cautioned that development cooperation could only complement a country’s own efforts, highlighting that the guarantee of human rights, the freedom of the press and a lively civil society as well as the fight against corruption, were indispensable for the democratic development of South Sudan.

The singing of the agreement was witnessed by the Minister of Agriculture and Forestry Betty Achan Ogwaro and the Minister of Water Resources and Irrigation Paul Mayom Akec.