Participants during the Greater Bahr El-Ghazal Inter-Governmental Dialogue, May 30.

The situation of children in the streets of the four states of Greater Bahr El-Ghazal is alarming,” the Deputy Governor of Western Bahr El-Ghazal State Moris Yiel said.

Speaking during the opening of Inter-Governmental Dialogue sponsored by the National Democratic Institute (NDI), the Deputy Governor stressed, no street produces children”, adding it is our, the parents, negligence that pushes children to the street”. 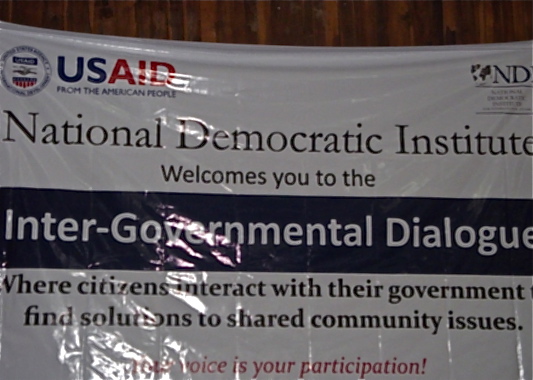 A banner of the Greater Bahr El-Ghazal Inter-Governmental Dialogue, May 30.
© The Niles | Majok MonAccording to the politician the children -- he suggested should not be called street children, rather children without parental care -- will cause havoc to the residents of the respective town.

Moris Yiel urged his colleagues to come up with strategies” to support the children and to get them off the streets of Wau, Aweil, Kwajok and Rumbek.

Veronica Eragu, the former Human Rights Commissioner of Uganda and a consultant on street children for the Greater Bahr El-Ghazal states Inter- Governmental Dialogue, indicated that among the four states Wau and Aweil have the highest number of children living on the street -- about 3,000 in Wau and 2,000 in Aweil.

She said that South Sudan has to resolve the problem of street children by addressing the root causes and apply the force of the law on parents who intentionally neglect their children.

Mangar mentioned early and forced marriages as a major cause of family breakdowns, leaving the children without parental care. He also stressed traditional practices such as polygamy, often leaving the mothers as the only care taker, forcing many children onto the streets.

This is the wrong behaviour for parents to neglect children.”
Ezekiel Thiang MangarThere is social failing from the parents to fully take care of the children. These are the parents that should face justice for neglecting or using children for business making,” Veronica Eragu said, referring to parents who send their children to beg for money on the streets.

Some parents are making business out of children by allowing them to beg people in the street in order to come with money for the family,” Ezekiel Thiang Mangar said. This is the wrong behaviour for parents to neglect children. This is punishable by the laws of South Sudan,” he added.

According to Veronica Eragu, a study conducted with 284 children in Wau, Aweil, Kwajok and Abyei suggests that 11 of the interviewed children have lost both parents by either violent conflict or disease.

72 of the interviewed children have one parent alive and 201 children still have both parents to take care of them. These children are ready to be reunified with their parents, Eragu emphasised.

The Inter-Governmental Dialogue concluded that a continuous awareness raising and dissemination of the 2008 Child Act among the citizens will help to reduce the number of children living on the street, as it is assumed that parents will resume their roles and responsibilities.

The establishment of a Greater Bahr El-Ghazal states Committee on Street Children, to carry out reunifications of children in the four states, and the construction of a reformatory centre for street children were among other conclusions.

The conference took place from May 29 to May 30, in Wau and was attended by over 40 participants, among them four ministers, chiefs as well as representatives of women groups and civil society organisations.