We want the UN to bring more soldiers,” Hussein said on Wednesday, May 29, at an event to mark the work of peacekeepers.

Most of South Sudan is peaceful and there are peacekeepers deployed all over. Areas of conflicts like Jonglei must be identified. I think this is where the UN can focus.”

With some 6,560 troops in South Sudan the UN is strapped to cover the entire country. Jonglei State, the nation’s biggest, is twice the size of Ireland. Transport in the region is impaired as seasonal rains have submerged roads and farmland. 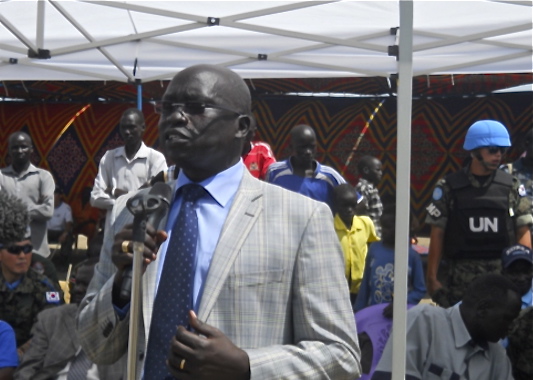 Jonglei State Deputy Governor Hussein Mar Nyuot speaks at the International Day of United Nations Peacekeepers ceremony in Bor, May 29.
© The Niles | Deng Machol MonyrachIn Bor, the Indian peacekeepers marked the International Day of United Nations Peacekeepers by paying tribute to the five blue helmets, Indian nationals, and seven civilian UN staff members, who were killed in an ambush in Jonglei in April. In May President Salva Kiir said he would punish members of the security forces who committed acts of violence against civilians in Jonglei.

The region has been shaken up by the rebellion led by David Yau Yau, a leader of Murle decent who took up arms after failing to secure a position in the local government.

Hussein appealed to the UN to double its forces in the region, to ensure citizens’ safety. By working together we can win and we can reinstate peace in restive Jonglei State,” he said.

Hilde Johnson, who heads the UN Mission in South Sudan (UNMISS), said peacekeepers were trying to provide balanced protection to civilians in the difficult region, where around 23,000 civilians have been displaced, many fleeing to neighbouring countries.

We have recently increased our military presence throughout the state to six companies, equally present in the areas of Jonglei’s three main communities (Dinka Bor, Lou Nuer and Murle), we are not the peacekeepers of one community, we are the peacekeepers for all of them,” Hilde Johnson told reporters.

She stressed that peacekeepers are not in South Sudan to replace the government army.

We are not the peacekeepers of one community.”
Hilde F. JohnsonLast year, UNMISS received threats by armed rebels to desert Pibor County, but the UN responded by increasing the military presence in the region.

Speaking in an interview in late May, Johnson said the peacekeepers lack sufficient troops and aircraft to protect civilians affected by fighting in the large eastern region where tens of thousands of people have fled clashes between the army and rebel forces.

As the situation peaked in May, five humanitarian organisations operating in Boma town and the only medical organisation in Pibor County in South Sudan’s Jonglei State fled amid increasing tensions.

Rebels led by Yau Yau temporarily seized control of Boma, a strategically significant historic town near the Ethiopian border, until it was retaken by the South Sudanese army (SPLA).