The Jonglei State Police Commissioner Moses Majok Adol inspects the confiscated arms at the Tibek police station in Bor, May 29.

It is the latest phase of a long-running disarmament campaign in Jonglei State and Bor town, where the government seeks to remove illegal weapons from civilians.

We got 85 AK47 rifles, one PKM and many pistols from civilian houses,” said Moses Majok Adol, Commissioner of South Sudan’s Police in Jonglei State after the search last Wednesday. 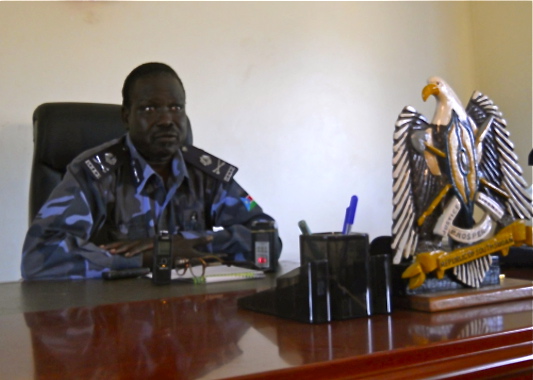 Moses Majok Adol, Jonglei State Police Commissioner, at his office in Tibek, Bor, May 30.
© The Niles | Deng Machol MonyrachThe arms search targeted individuals hoarding guns who could use them to rob or commit other crimes, Majok Adol said. Individual’s houses were earmarked by security forces for inspection.

Tensions are running high in the region amid talk that rebel David Yau Yau may attack Bor. A month ago, hundreds of organised forces and soldiers deserted their positions in Pibor County due to a shortage of food and arrived at Bor, panicking locals.

A force comprising of more than 1,000 soldiers, officials and police officers were deployed early on Wednesday morning to ensure that no one could hide their weapons. In previous weapons searches, people were seen burying their guns in the soil to avoid confiscation by the police.

Officials told the locals to remain calm, calling for cooperation with the forces. All the roads leading to and out of Bor town were sealed off.

The clampdown follows numerous cases of robbery at gunpoint reported in Bor over the last year.

But residents told The Niles that they remain fearful as gun ownership is common in the entire settlement, not just the homes targeted by the latest search.

We got 85 AK47 rifles, one PKM and many pistols from civilian houses.”
Moses Majok AdolRebel David Yau Yau, an ethnic Murle and former theology student, first rebelled in 2010 after failing to win a seat in the parliament. After accepting an amnesty in 2011, once the country won independence, he took up arms again a year later.

Thousands of locals have fled their homes since the start of the Pibor County rebellion. The current unrest is the latest chapter in a long history of insecurity, involving militias and rebels, inter-communal conflict, cattle raids and child abductions. This history has impeded development and infrastructure-building in the large eastern state.