Inmates listen to State officials during an inspection of the Warrap Prison, February 26.

The Acting Director of Prison Services David Deng Alier said 17 prisoners have died since last year. Of those three died in the past weeks and another four are said to be in a critical condition.

The prison is in dire conditions that include congestion, poor hygiene, poor feeding and lack of medical services,” he told The Niles.

The small prison has no windows to let in the air. Those who died suffered from swollen limbs, skin rashes, and acute diarrhoea.

We struggle to breath when inside,” prisoner Malueth Dhual told a government delegation that visited them. There are no windows to let in the air and we suffer with the current heat.” 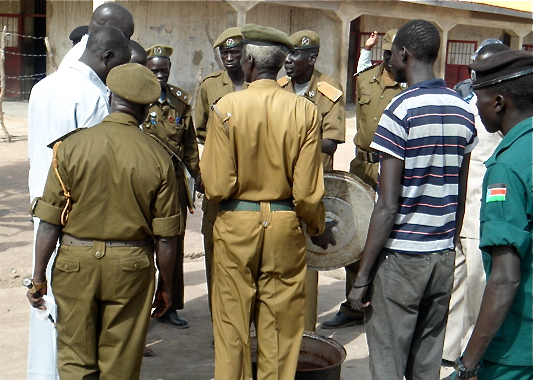 State officials inspect the food served in the prison following the deaths of several inmates, February 26.
© The Niles | Aping KuluelFood meanwhile, is in short supply for the inmates. Authorities blamed the inadequacy of food supply on the fact that the supplier had not been paid for over a year.

Another inmate serving a two-year sentence linked the recent deaths to poor feeding. If we eat one type of food (Posho and beans) for the whole year, there is no way we can’t get sick,” he said, adding that some food served is no longer edible.

Overcrowding is also extreme: Officials said the Warrap State jail contains 193 inmates, more than three times as many as it should.

Some captives like, Thiep Thiep, blamed the cramped conditions on the inadequate legal system. This prison is overcrowded because it takes judiciary long to settle our cases,” he said.

State judicial officer, Michael Wade refuted this, arguing that delays are due to a lack of cooperation with the investigation process.

The main challenge here is that, in most cases, parties are not cooperative during investigations hence the cases take too long,” he said.

On February 26, 2013, a delegation of state authorities visited the prison amid concern about deteriorating prisoners’ health.

State minister Solomon Anguei said doctors reported over crowding, poor hygiene and lack of dietary meals. He urged the prison administrators to alert his ministry about such cases so that they can quickly be addressed. 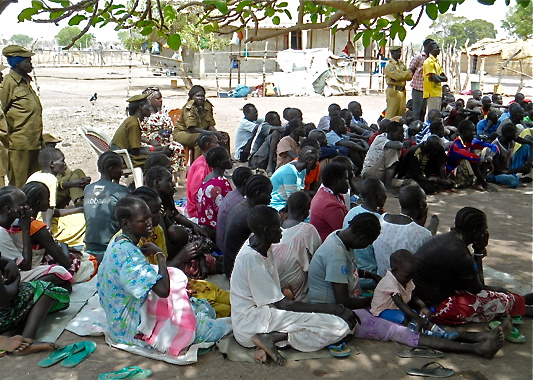 Female prisoners detained in Warrap Prison, February 26. © The Niles | Aping KuluelThe minister promised a routine check-up and controls on prison conditions. Meanwhile, authorities said they would try and reduce the number of the inmates by sending those serving shorter sentences to other prisons in the region.

According to the report, based on interviews with 250 inmates and a range of officials and officers, researchers found that a third of South Sudan’s prison population had not been convicted of any offence or had been detained for long periods while waiting for their case to be processed.

Prison conditions are grim and infrastructure is rudimentary, damaged and unhygienic,” the report said, adding that ventilation, water and food were in short supply.

Ten inmates died in Aweil prison and at least five died in Bentiu prison in 2011, mostly from treatable illnesses, the report said.

Lakes State wants to eradicate traditional head marking among boys
All articles are available for republishing. Please notify us via email when you syndicate our content. Thank you!
© 2020 MiCT, all rights reserved.