Underage pregnancies or extended birth can cause obstetric fistula, a condition which blights the lives of many women in South Sudan.

When a woman’s pelvis is small or when a caesarian section is done poorly, it damages the woman’s birth canal,” said Peter Mangar Lual, a nurse in Akot PHCU.

Underage pregnancies and marriages are common in the Dinka culture, increasing the risk of complications, which can cause a woman to leak urine or faeces and turning her into a social outcast. Peter Mangar Lual, a nurse at Akot Primary Health Care Unit, January 23.
© The Niles | Abraham Daljang MakerIn South Sudan around six percent of women were married when they were under 15. Almost half of all women are married by the time they turn 18, a United Nation report estimates.

Women are more likely to suffer the condition where there is poor antenatal health care, a reality for most in South Sudan.

Achuolic Monydhal has suffered from obstetric fistula for about 14 years. Her search for treatment has taken her to Khartoum in Sudan and Lokichokio in Kenya but all in vain.

It was August 1999, I had a long labor which got me during a long journey on foot,” she recalled, adding she was 17 at the time.

Her baby was already dead when she reached a health centre after two days labor. She also sustained damage to the birth canal. I am so traumatised because of this illness, I can’t freely interact with people, and I feel ashamed of myself. I feel that I am rejected by everyone,” she broke down in tears while speaking.

Besides this complication, Achuolic also complained that she does not have her normal period, because she said to have allegedly been stitched badly leaving a small opening for her period. She hopes that one day she will be treated, and will be married to have children. 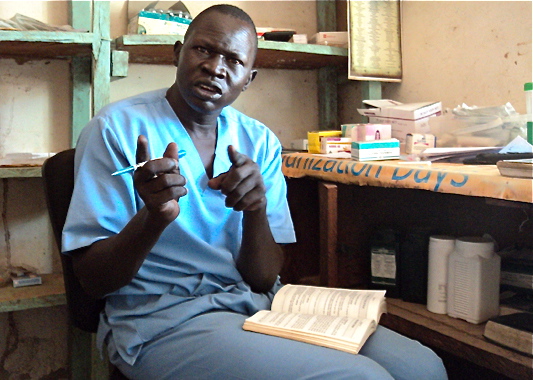 Ezekiel Manyang, a midwife working in Rumbek State Hospital, January 21.
© The Niles | Abraham Daljang MakerEzekiel Manyang Akec, a midwife in Rumbek State Hospital, said the position of foetus in the mother’s womb can cause this complication, for example if it has its back or shoulder towards the birth canal or if a baby pushes the arm out during the delivery. These positions prolong the birth and can lead to fistula if proper medical attention is not given immediately.

However, given the patchy health service, the majority of women give birth at home, helped by traditional birth attendants who often lack the skills and equipment.

According to a United Nations Population Fund (UNFPA) report, published last year, South Sudan’s maternal mortality ratio stands at 2,054 per 100,000 births, making it among the worst in the world.

The city of Wau showed some improvement, with the help of UNFPA: In 2012 63 women were operated, compared to 2006 when only 19 cases were treated. UNFPA also launched a campaign in Rumbek, Lakes State in 2010, out of 100 patients that were present, 66 were confirmed with Obstetric fistula and were treated.

The UNFPA report suggests that just 16 percent of women have antenatal care, while only 3.5 percent can access contraceptives. Revealing the drastic shortage of medical staff, South Sudan has currently three surgeons and four nurses trained in fistula repair and care respectively in the country, a meagre number given the high incidence of obstetric fistula.