Missing maps: Where are the colonial-era maps of the South Sudan-Sudan border?

South Sudanese Vice President Riek Machar Teny recently returned from UK where he suggested some 1956 maps have been misplaced in the British archives. A Juba-based researcher, however, argues that there are no reliable maps from that date. In fact, the only colonial-era maps available are too imprecise to solve the border conflicts. 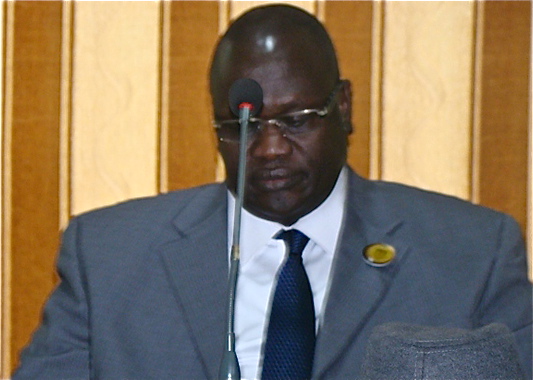 The Vice President of the Republic of South Sudan, Riek Machar Teny.
© The Niles | Joseph EdwardThe South Sudanese stick to the 1956 borders, but the map is nowhere in the British archives,”Machar said after his London trip. The map that shows the formation of Nuba Mountains and Southern Blue Nile province and which indicates Sudan and South Sudan borders in Upper Nile State, Unity State oil region and part of Bhar el-Ghazal which would have helped in the border demarcation is even missing.”

But international researchers have a different take on the map debate. Nicki Kindersley, a PHD student from Durham University who is working on the construction of the South Sudan National Archives in Juba, said the debate hinged on imaginary maps.

There are no maps of the 1956 border from 1956,” she wrote on her blog Internally Displaced. The British were not interested, at the time, in conducting a costly, complicated mapping process of what was – in 1956 – only an internal administrative border with no heightened political significance.”

A reader commenting on her blog post further explained: There is no map of the 1956 border updated to the last inch of territorial detail because in 1956, or in the last months of 1955 for that matter, most of the British were no longer in Sudan.”

It is not useful to try to superimpose these [pencil lines] onto GPS large-scale maps.”
Nicki KindersleyInstead, colonial-era administrative borders were laid out by the survey department from the 1930s through to the early 1950s, Nicky said, adding that they were not lost.

I’ve seen part of the existing ones from the Nuba Mountains and Bahr el-Ghazal in the Sudan Archive. They can be found in the Royal Geographical Society in London, the Sudan Archive in Durham and the British National Archives in London. These were consulted in early rounds of the border demarcation exercises.”

However, the maps cannot solve ongoing border disputes, she said. Most of the existing documents only show pencil lines on small-scale maps. In the South Sudan National Archives here in Juba, there are lots of these tiny maps, with great big crayon lines drawn by British administrators to demarcate local admin areas. It is not useful to try to superimpose these onto GPS large-scale maps: The pencil lines themselves would be tens of miles wide, and when we’re dealing with disputed territories of tens of miles, that’s not particularly helpful,” she explains.

Read Nicki Kindersley’s Maps of the Sudan border: the endless conversationIn her blog Nicki Kindersley explained that the evidence for border demarcation on 1956 administrative boundaries is available, but not in an easy-to-read map form.  The proof of where the line lay in 1956 is in the detailed administrative notes in the Durham, London and Juba archival holdings, where the papers could shed light on which provinces – and therefore which regions – controlled (or tried to control) specific, village-by-village areas.  This work is according to her painstaking and far more difficult than consulting a single map.

That raises a question mark over the discussions during the Comprehensive Peace Agreement (CPA), which was signed in 2005, where Sudan and South Sudan talked about using the 1956 colonial era border demarcation as a basis for current borders. The two parties failed to reach agreement on the topic.

The pencil lines themselves would be tens of miles wide.”
Nicki KindersleyNow the border demarcation process has come to standstill as both parties eye resources along the border area. Accusations fly between Khartoum and Juba. Conflicts continue along the border-regions of Jau, Heglig and Kafia-Kinji where oil wells are based.

Border demarcation, as well as the oil issue and Abyei are under discussion between the two nations in Addis Ababa, Ethiopia. At the start of 2013, both South Sudan and Sudan Government called in the African Union and the United Nations Security Council to help overcome the impasse.

The United Nations Security Council has urged both parties to withdraw from the border as it works to demilitarise the zone along the South Sudanese and Sudanese border. South Sudan and Sudan have reportedly not yet withdrawn their forces 14 miles away from both sides as requested by UNSC to control attacks and aggressions from both sides.

The UNSC has passed a resolution ordering the immediate withdrawal of South Sudan and Sudan forces from the disputed area of Abyei. The UNSC, under the Presidency of Li Baodong, gave South Sudan and Sudan two months to finish the discussions on the Comprehensive Peace Agreement. The deadline was originally in July 2012, but no deal was hammered out given entrenched animosity and suspicion between the two sides.

International team sound warning on Jonglei Crisis
All articles are available for republishing. Please notify us via email when you syndicate our content. Thank you!
© 2020 MiCT, all rights reserved.