Officials from Lakes State are determined to stamp out the traditional rite of head marking. In a rite dating back to the colonial days, several lines are cut into young boys skin, causing extreme pain and risking the spread of HIV and other diseases.

The tradition was banned four years ago when South Sudan Child Act was enshrined in law. However, it reemerged last year, when boys ran away from school and their families in order to take part in the initiation ceremony. 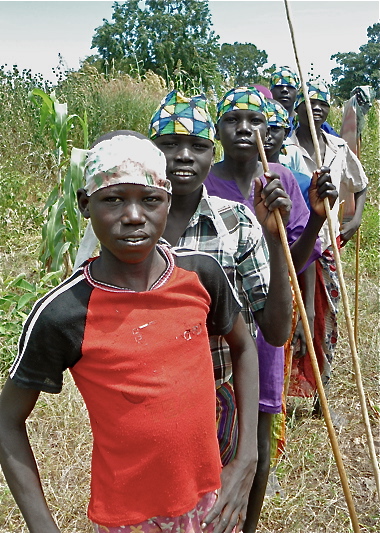 Proud to be marked: Young boys after the traditional head marking, October 13, 2012.
© The Niles | Aping KuluelBut that should change, Rumbek East County Ministry for Education Isaac Magual John told The Niles. All Payam administrators of our county are issued summons to identify the head markers and arrest them, so that the law will take its course.”

Schoolboys aged as young as 10 run away to get marked, driven by their belief that they will work in cattle camps. They often fail to return to classes.

Authorities describe the markings as a primitive practice which inflicts severe physical pain. The Child Act 2008 clearly stated that every child must be protected from negative and harmful cultural and social practices such as scarification, tattooing, head marking, piercing and teeth removal,” Magual explained.

Some 500 boys registered to attend the ceremony in the central South Sudanese state. However, given that in Rumbek East County alone 78 pupils were head marked, officials suspect that the real figure could be much higher.

Although the state government is seeking to ban the markings, young boys often believe it is a vital tradition which imparts cultural and social kudos.

Madat Makoi, 13, and Marop Makuac, 10, told The Niles that they want to follow in their fathers’ and grandfathers’ footsteps. I went for head-marking to prove myself to senior head-marked youths who always abused me by saying that I was just a boy,” Marop said.

Madat said that his markings reflected his parents’ plans for him to look after cattle, instead of attending school. My parents keep on postponing my enrolment in school, therefore I decided to get the initiation so that I can become a cattle keeper as they wish,” Madat said.

We were disadvantaged by the Brits with the introduction of that primitive culture.”
Chief Akol Yol KuacExecutive chief of Aduel Payam, Akol Yol Kuac, said the government should effectively enforce the law because school children are still running away to participate in the rite, which mostly takes place between October and December.

Back in our time it was done when you were mature enough. Now very young boys who are barely 8-10 years old and are not fit for initiation ceremonies go for it, even without their parents being aware of it,” he explained. He added that the state’s big task is also to fight high illiteracy rates in the country, which are among the worst in the world.

Commercialism has infiltrated the tradition with head markers asking for money, arguing that they have to pay off government fines if they are arrested. 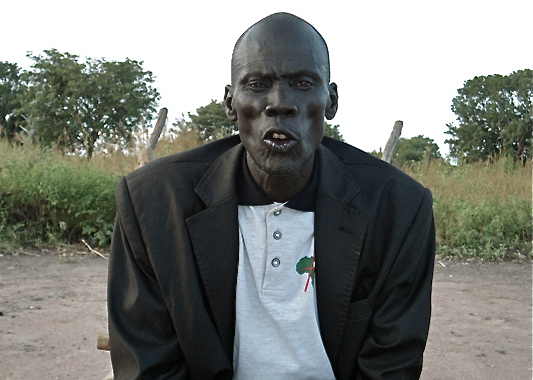 Executive Chief of Aduel Payam, Akol Yol Kuac, speaking to The Niles in his home, October 13, 2012.
© The Niles | Aping KuluelAccording to executive chief Akol Yol Kuac, the law fails because of patchy implementation. He said head markers continue to mark young boys because when executive chiefs arrest them, they are given a fine rather than heavier punishments. When we arrest those head markers, they are subjected to a simple fine which they can easily pay using the money they collected from the boys.”

Different traditional initiations and other body scarifications are practiced by several tribes in South Sudan such as Dinka, Nuer, Mundari, Shiluk, Zande, Lotuho and many more. They were introduced by colonialists as signs of identity. We were disadvantaged by the Brits with the introduction of that primitive culture,” Chief Yol said. It is time for our people to discard that practice.”

Among the Dinka Agaar, the forehead is cut with six contour lines as a means for boys to ascend to maturity. However, the practice is becoming unpopular both among the Agaar community and other groups, due to its negative health and social implications.

County Director of education Magual voiced his concerns over the dangers of blood-transmitted diseases since several boys are cut using the same knife. Given HIV/AIDS and other dangerous diseases which are transmitted through blood, head markers are risking the life of those kids,” he said.

Other risks include serious haemorrhaging, as several blood vessels get cut. For instance, 10-year-old Marop recalled that he was unconscious for three hours after the initiation after extreme blood loss.