A conference in Western Equatoria State, involving chiefs, commissioners and councillors from the state’s ten counties, discussed and drafted a girl’s education bill to be presented to parliament.

Western Equatoria Education Minister Pia Phillip Michael said the law should protect girls both at home and at school. 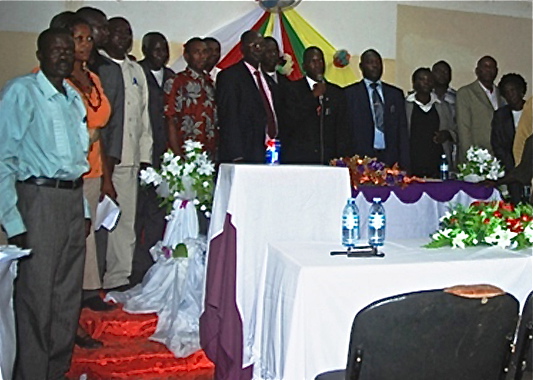 Conference participants posing for a group picture, October 22.
© The Niles | Joseph NashionThere should be a regulation especially about teachers who impregnate schools girls. They should be summarily dismissed from teaching profession,” the minister said.

He added that the law should address the age at which girls can legally be married. At present there is no minimum age.

The conference failed to reach an agreement, but referred the age limit issue to the state assembly.

The situation in the state, which borders on the Central African Republic and the Democratic Republic of Congo, reflects South Sudan’s dire track record of educating girls.

Proportionally, the nation has fewer girls attending school than any other nation in the world. Fewer than one percent of girls complete primary education, UNICEF says.

This lack of education causes poverty‚” the governor explained.

Early marriage and pregnancies force girls out of school at a young age. Minister Pia said the dropout rate for girls in the state this year is about 20 percent.

The participants agreed that if a boy impregnates a school girl, both should be sent to jail, although they did not agree on the length of the sentence.