Akim Mugisa
South Sudan’s Western Equatoria State is part of a wide geographic area traumatised by the Lord’s Resistance Army (LRA). An international bid to quash the group is yet to catch the elusive leader -- and locals fear…
Archive
Share this article:
Facebook
Twitter
Google+
Visit us:
Facebook
Follow us:
Twitter
Permalink:

A group of LRA fighters and abducted children that defected in 2009.

Although the state of Western Equatoria has been relatively calm for the past year, memories of the LRA’s bloody attacks are fresh in the mind of Jackson Jerome.

The border is so close and they may come back anytime‚” says the 49 year old who works for the South Sudan Relief and Rehabilitation Commission (SSRRC) in Bangasu Payam.

He said that the rebels, accused killing thousands of people and kidnapping many more during more than two decades, came within two kilometres of the state capital of Yambio last year.

Jerome tells how they were driven back by the Arrow Boys, a locally mobilised force armed with bows, arrows and spears. He praised the vigilantes in tracing footmarks of the marauding rebels, providing information and guiding the Uganda People’s Defence Forces (UPDF). We were helped by the UPDF soldiers who entered the bush and chased them back to Congo and Central Africa where they are living,” he told The Niles. Some of the young girls that managed to escape from the LRA are pregnant or have children from their time with the LRA.
© The Niles | Akim MugisaThe last recorded LRA attack on South-Sudanese soil was December 2011 in Boro Al-Madina, Raja County, Western Bahr el-Ghazel State, when they reportedly abducted and killed two girls.

From its base in Garamba, the Lord’s Resistance Army took advantage of the thick forests. Living on free game meat, they abducted Congolese citizens to reinforce its troops, inflicting horrors on local civilians within the borders of South Sudan and CAR. The most recent LRA attack was in the Central African Republic, 800 kilometres east of the capital Bangui. Press reports stated that 55 people were abducted by an LRA group of about 20 armed fighters.

Abductees who escaped or were rescued from captivity have testified to horrific experiences.

Humanitarian agencies and authorities in affected countries have worked to reunite women, men and children, including former combatants, with their families. Many teenage girls are among victims, escaping from the troops with pregnancies and breastfeeding the babies of rebel commanders. 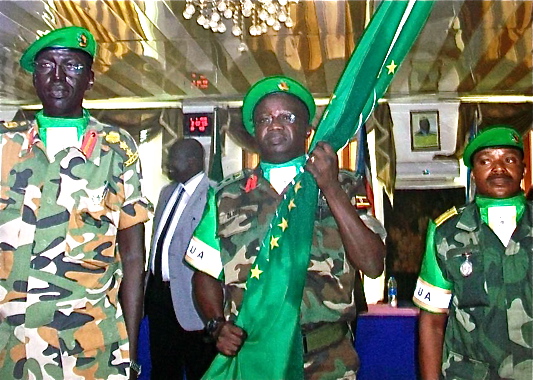 Uganda’s Col. Dick Olum (centre) and his South Sudanese and Congolese deputies after receiving the AU mission symbols, March 23.
© The Niles | Akim MugisaArop Charles is among the ex-fighters who reportedly headed a group that butchered 148 Congolese men, women and children in a church in Faraje during the 2008 Christmas holiday. We were always scared of surrendering. They told us that the Uganda government was killing those coming out of the bush,” Arop told UPDF soldiers after defecting in Ima.

He claimed to have been LRA’s Director of Operations in the eastern part of the Democratic Republic of Congo prior to abandoning rebellion. With their hair in dreadlocks, several other returnees testified having been in the bush for over ten years since their abduction and conscription as teenage fighters in northern Uganda.

The LRA’s remaining force is estimated at a fraction of its former strength, numbering some 450 men. Its leader Joseph Kony is unwilling to surrender due to indictments by International Criminal Court, according to a senior commander, Ceaser Aciellam captured in May this year. He is afraid of accusations against him in The Hague,” remarked Aciellam.

Attempts to capture the long-standing rebel chief have failed, the nearest the Uganda People’s Defence Forces (UPDF) came to their target was seizing his personal belongings including safari suits and communication gadgets.

Closely pursued by the Ugandan and Congolese troops, the rebels have adopted new methods, such as splitting into smaller groups to avoid detection and easily pillage villages. Hundreds of civilians have been killed or abducted, villages abandoned and agricultural halted, as locals tending their gardens feat that fighters could emerge from surrounding bushes any time. 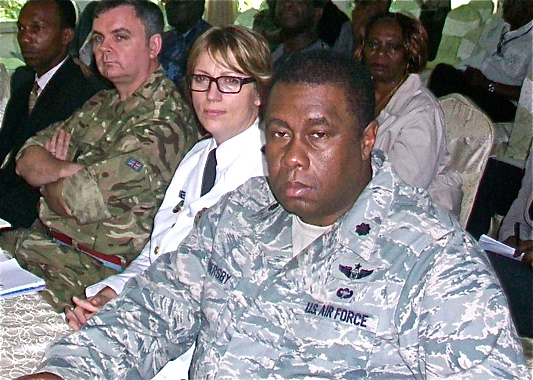 A member of the US airforce listening to speeches at the launch of the Joint Operation against LRA in Juba, March 23.
© The Niles | Akim MugisaFelix Katie, a Yambio-based local journalist, said a five-strong group of suspected rebels were sighted moving through the state in July. One or two may be armed with guns while others carry sticks and pangas (machetes). They are mainly active during rainy seasons when they disrupt cultivation or come to steal food at harvest time,” he adds. Wildlife agencies and other government institutions have blamed the group for poaching elephants for ivory, gold mining and logging in forests to sell the resources and acquire supplies.

The LRA insurgency has attracted regional and international concern with the United States government blacklisting the group as a terrorist organisation. Amid rising indignation, President Barack Obama’s leadership dispatched five months ago a 100-man contingent of its Special Forces to bolster the Regional Cooperation Initiative on LRA through provision of advisory, logistical and intelligence support.

Christopher J. Datta, Deputy Chief of Mission at the US embassy in Juba, describes Kony as a clever man but a monster. Mr. Kony you will face justice and that is going to happen soon‚” he said, adding that the insurgency, one of Africa’s most enduring, had gone far enough. Arrest warrants issued by the International Criminal Court (ICC) in 2005 still hang over the heads of Joseph Kony, his commanders Dominic Ongwen, Okot Odhiambo and others for war crimes and crimes against humanity.

But seven years since the indictments, the fugitives remain at large without being arrested, killed or brought to court over their alleged atrocities. An African Union (AU) backed mission, the Regional Cooperation Initiative on LRA (RCI-LRA) was launched in March, sparking high expectations the rebel group would finally be stopped. South Sudan’s Vice President blames Joseph Kony for the failed 2008 negotiations, which he hosted as chief mediator.
© The Niles | Akim MugisaSouth Sudan’s Vice President, Riek Machar Teny, chief mediator during the aborted 2008-peace process between the LRA and the Ugandan government, commissioned the initiative in Juba. He had murky ideas of what he wanted but did not sign a deal that was good for him. Kony will blame himself for not listening to the world,” Machar said.

He expressed confidence that a four-nation joint action project supported by the international community would work and rid the region of the LRA menace. A proposed 5,000 strong Regional Task Force (RTF) composed of armies from Uganda, South Sudan, DR Congo and Central Africa Republic was expected to undertake the task but only around half that number of forces have been deployed so far.

Dick Olum heads the Regional Task Force. Four centres have been established in Yambio and Nzara in South Sudan’s Western Equatoria State, Obo in Central Africa Republic and Dungu in DR Congo to coordinate the initiative but they face a shortage of resources. 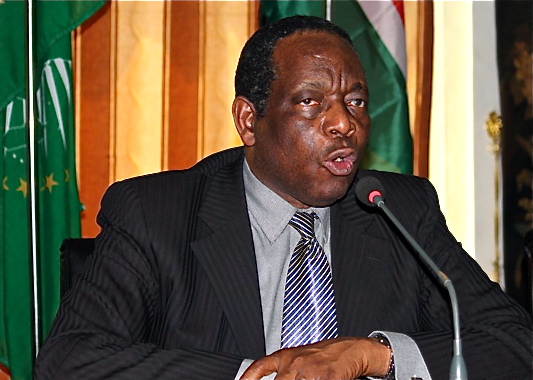 AU envoy Francisco Madeira says they are not against Kony as a person rather his actions, March 23.
© The Niles | Akim MugisaAfrican Union special envoy, Francisco Madeira said that the military operation faced logistical challenges as well as a harsh terrain. Madeira affirms that the RTF mission seeks to eliminate LRA through neutralising, capturing or forcing Kony and his commanders to surrender in order for the region to regain peace and stability. It does not matter whether Kony commits suicide or is killed,” said Madeira.

Speaking at the handover of 2,500 troops for the regional task-force in Yambio early this month, the AU envoy said the immediate plan is to deploy troops to protect communities. He said the AU mission and humanitarian agencies would welcome LRA fighters who will voluntarily surrender to the authorities.