We will not give up, we will continue to fight for the benefit of our children and our nation so that the coming generation will not have to encounter the same challenges that we are undergoing now.” (Grace Apollo, Member of Parliament for Western Equatoria)

Other resources that focus on gender in South Sudan:

Such institutional shifts reinforce the changing role of women in South Sudanese society, for which Sudan’s two civil wars (1955–1972 and 1983–2005) served as a catalyst. In wartime, a large number of men were killed or were absent for long periods of time, and women stepped in to fill roles that had traditionally been held by men. Women became the backbone of their communities while many played key roles in the armed forces, some acquiring an education and work experience in the process. As women’s responsibilities increased, gender roles, which had been so entrenched before the war, began to shift.

Patriarchy and sexism persist; cultural norms that subordinate women to men in almost all social interactions remain pervasive. Yet the women of the world’s newest country are increasingly stepping into leadership roles in all sectors.

‘We were all soldiers’: Female combatants in South Sudan’s civil war [part 1]
‘Sibu ana, sibu ana’: Survivors of sexual violence in South Sudan [part 2]
‘If you can’t use your hands to make a living…’: Female sex workers in Juba, South Sudan [part 3]
Taking on new challenges: Women in Service Delivery [part 4]
‘This is how marriage happens sometimes’: Women and marriage in South Sudan [part 5]In the post-conflict period, many South Sudanese women became active in politics. Some did so as a result of the responsibilities they took on during the war. At the time, many women transported ammunition and food to the frontlines, cooked for the soldiers (some becoming their wives), took care of wounded soldiers, or served as translators. When the peace agreement was signed in 2005, many of these women aspired to remain involved, to join in the new decision-making processes, and to bring change and lasting peace to South Sudan.

Women also emphasised that their involvement in politics, and in leadership roles in various other spheres, is related to their desire to improve the provision of health care and education, and to help in the fight against poverty. The desperate state of public health and education services directly affects women on a daily basis and these challenges have played a significant role in propelling women first into activist, and later into leadership roles.

For some Sudanese women, entry into politics provides a platform from which they can realise their childhood dreams of achieving gender equality, empowerment and a free and just society for all. A desire to oppose destructive patriarchal practices has led many women across the region, including in neighbouring countries, to become advocates for the rights of girls and women,” says Miria Matembe in an interview. These women want to challenge the systems they regard as undermining women, such as wife inheritance, unequal property ownership laws and violence against women.

On the whole, the women interviewed for this book said their wish is to construct a family-friendly environment throughout South Sudan, where children are protected and able to enjoy their childhood while growing into healthy, responsible adults who know their rights and are able to stand up for them.

The 25 per cent quota, which has not been met, is beginning to pave the way for greater participation by women in politics. Yet several of the women interviewed expressed some doubts about how the system is working in South Sudan. Women’s lack of formal education (as well as the technical knowledge, and relevant experience that tends to go with it) is a major hurdle, especially given the highly complex nature of South Sudanese politics. Many women politicians interviewed cited language (the need to be proficient in English or Arabic) as another practical barrier in limiting them in the effective execution of their duties. 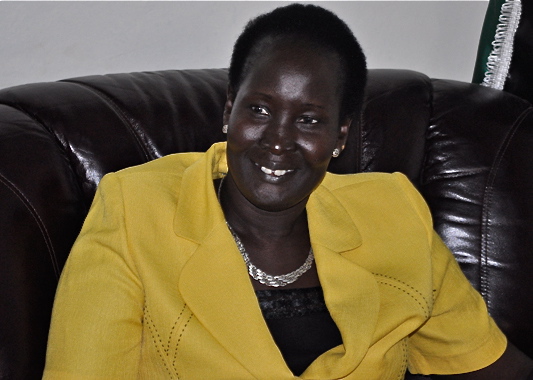 Nyandeng Malek Delic, Governor of Warrap State, is the only female Governor in the Republic of South Sudan. Speaking to The Niles, she explained why she thinks more women will have positions of power in South Sudan in the near future: Nyandeng calls for more women at the topWomen who consider standing for political leadership face considerable opposition and have to overcome several practical obstacles. Very few women have access to the resources required to pay nomination fees and run election campaigns. Women seldom own property, and their spouses or other male relatives usually control their finances.

Those women, who can muster the resources to fund and win election campaigns, then face the challenge of meeting the expectations of voters with almost no state resources at their disposal. The belief that public life and leadership positions should be reserved for men remains widespread, and women vying for leadership positions have difficulty winning the trust of voters.

Those women who manage to put aside society’s stereotypes, and stand for political office despite the many practical obstacles, often face opposition from their own families. Some male colleagues are disrespectful of female leaders, make jokes about them, and refuse to take them or their work seriously.

Outside of government, women are making important contributions to the rebuilding of their nation via their participation in various women’s organisations. The Sudanese Women’s Voice for Peace (SWVP) has provided a forum in which women could be involved in the peaceful resolution of conflict. A further example of women mobilising women is the Women’s Union. Women’s involvement in such organisations provides them with an opportunity to explore new levels of responsibility in a public space. In this way, a number of women have found the confidence to negotiate and compete with men for political office.

Men and women working together

Download the bibliography:
‘In power without power’: Women in politics and leadership positions in South SudanAll the women interviewed for this chapter voiced a vision for the future of their country as peaceful and secure, with clean water and adequate educational and medical services -- a place where both men and women will work together for the common good. In focus groups, a number of women agreed with Martha Kok, an MP for Ulang County, who stated that women with the right skills sets and competencies will change the situation of women in South Sudan for the better.

Adapted by Cara Meintjes, from Asha Arabi’s chapter, ’In power without power’: Women in politics and leadership positions in South Sudan” in Hope, Pain and Patience: The Lives of Women in South Sudan. Edited by Friederike Bubenzer and Orly Stern. Photographs by Irene Abdou and Jenn Warren. A Publication of the Institute for Justice and Reconciliation. ISBN Number: 978-1-920196-36-3. Published by Jacana Media. Available from http://www.jacana.co.za/