Meen Achiek, father of a malnourished child at Rumbek State Hospital in September.

In Lakes State more than 10 children are admitted to hospital every month with acute malnutrition.

John Kennedy, a nurse working in the children’s ward in Rumbek State Hospital, explained that most children admitted were severely malnourished. He said that July, August and September are the worst months for food shortages in the state.

Mothers need to know that late weaning will make your child healthy and strong.”
John KennedyEarly weaning of the child will result in a lack of nutrients in the child’s body, this will cause malnutrition,” Kennedy told The Niles.

Poverty is the primary cause of malnutrition. A UN study published last year showed that the majority of South Sudanese live below the poverty line of US$ 72 per month.

Mothers need to know that late weaning will make your child healthy and strong,” he said, adding that cows milk, fish and fruits are the best food for children aged two and above.

Meen Achiek, father of a malnourished child said that he came from Cueibet County, 33 miles away from the state capital. He explained that the child had to be weaned when the child’s mother got sick. He explained how his child lost weight rapidly, refusing food and cows milk offered. 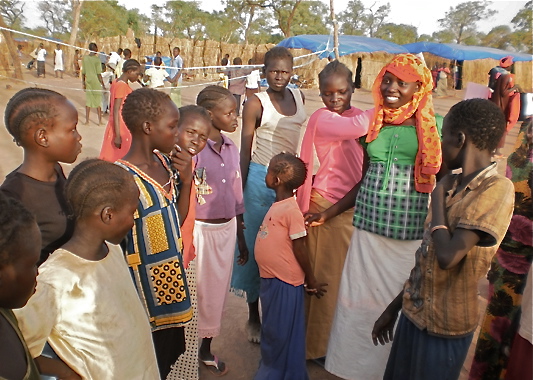 Children in Yida refugee camp, May 13. © The Niles | Bonifacio TabanAcross South Sudan, malnutrition is a pressing issue. It is particularly extreme in the camps in the border area. The UN refugee agency last month expressed concern about the alarming health and nutrition situation for some 170,000 displaced persons in South Sudan, particularly among children under the age of five and in the two camps of Yida and Yusul Batil.

The mortality rate for children less than five across all the camps is above the emergency threshold,” Paul Spiegel, UNHCR’s health expert and deputy director for the Division of Programme Support and Management said in a press conference.

Poverty across South Sudan has worsened following a disagreement with Sudan over oil transit fees which led to the halting of oil production, an all-important source of income for the young nation. Rising costs of oil have sparked sharp inflation of basic foods.