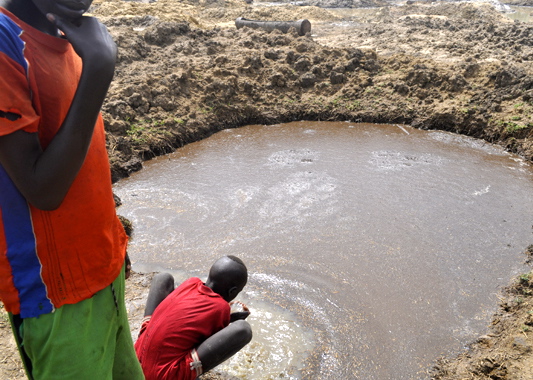 Safe drinking water is still rare in South Sudan: A boy drinks dirty water in Anan-Atak, Tonj East County, Warrap State on April 7.
© The Niles | Aping KuluelBy 2015 all the ten states would have water in urban regions,” he said. Our focus is now on the people of our country who are in rural settlements.”

He said the ambitious promise would cost at least US$2 billion and added that citizens must also ensure that they use the valuable resource sustainably.

Without access to clean drinking water, many South Sudanese people are currently at risk of contracting potentially fatal diseases. The very young and very old are most likely to suffer.

Owning to lack of clean water, children are especially vulnerable to death from water-borne diseases such as diarrhoea,” said Melker Mabeck, head of the ICRC delegation to South Sudan.

The organisation has launched a project to improve water access for 37,000 people in the Upper Nile region. However, a severe water shortage and lack of clean drinking water has hit refugee camps close to the Sudanese border, swelling child mortality and malnutrition rates and creating what the United Nations has called an alarming” humanitarian crisis.

South Sudan’s new Parliament Speaker: “We are watchdogs”
All articles are available for republishing. Please notify us via email when you syndicate our content. Thank you!
© 2020 MiCT, all rights reserved.