A flooded road between Rumbek and Yirol, September 27.

Severe rainfall and flooding has forced thousands of people from their homes in Jonglei and Unity states. Worst affected, however, is Lakes State, where impassable roads have brought local business to a standstill. 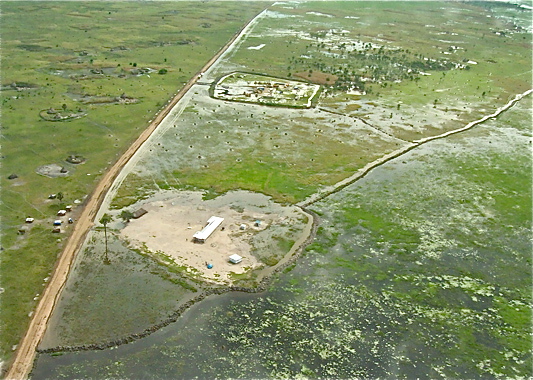 Aerial view of a flooded area in Mayiandit County, Unity State, September 30.
© The Niles | Bonifacio TabanOver 30 trucks loaded with goods are stranded between Yirol County and Rumbek as floods submerged the route between Yirol and Rumbek.

Two trucks belonging to his company loaded with fuel are stuck between Yirol and Rumbek. They have been trapped for more than 30 days as the floods deepened. Most of business activities will stop as fuel is out of stock,” he said, adding that his company, like many others, has run out of fuel.

There is also general shortage of basic food stuffs: Most of the trucks halted by the deep waters contain goods for the local communities.

Floods measuring a meter deep and more than 70-meters wide have made it practically impossible for trucks to pass.

Deputy Speaker of Lakes State Assembly Nhial Enock Chahoc appealed to the government to repair roads between Yirol and Rumbek. He called on the state to rescue people from greater Bahr el-Ghazal and Unity.

This is not restricted to Lakes State, it is a problem that affects millions of people in other states,” Chahoc said.

Nhial described the infrastructure as dangerous but said there was no sign of imminent improvement. We have no money to repair the road, things have become very hard for the state government,” he said.

Repairs to the roads are seen as unrealistic in the light of austerity measures imposed after the country’s oil production came to a standstill earlier this year.