Malaria kills one child every two weeks in Rumbek State Hospital in Lakes State, says Doctor Barnaba Bol Amukpiu. And the death toll is estimated to be far higher in remote rural areas with no access to health services. 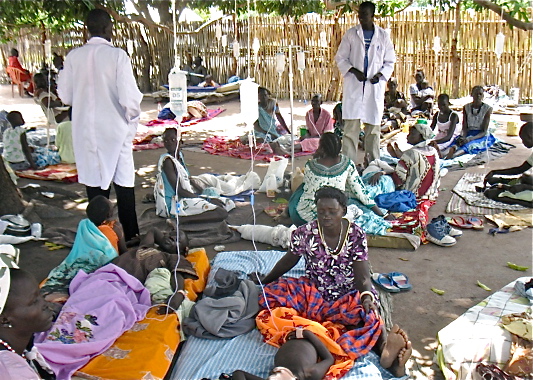 The Adol Primary Health Care Centre ‘outdoor ward’ in Rumbek East in June.
© The Niles | Benjamin Majok MonDoctor Bol, who is in charge of paediatric wards, describes the spread of the disease as alarming. We admitted over 90 children per day in July, August and September,” he says. We lost children who are rushed to the hospital while they are in a coma. We have lost children from far and remote villages.”

He adds the death toll would likely rise because the hospital has have run out of anti-malaria drugs like Artemether.

Meanwhile, patient numbers outstrip capacity, with just 38 beds for an average of 90 patients arriving daily. The doctor said some patients are being treated under trees because of inadequate wards in Rumbek State Hospital.

Also read: The hidden cost of malaria in South Sudan: $2 million and counting
by Esther Muwombi | in EconomicsYar Meen, whose son was admitted for nine days in Rumbek State Hospital in August, says that 13 children died during just nine days. Her son survived but many were not so lucky. The situation is really terrible; many children are dying,” she recalls, adding that patients are told to buy malaria drugs in the market.

The outbreak prompted State Governor Chol Tong Mayay to visit the state hospital where he was shocked by hospital conditions. There are no enough wards and patients are admitted under the tree,” he said.

The acting Director General Dr. Michael Mading appealed to the national government to end the shortage of malaria drugs in the state.