Akim Mugisa
South Sudanese roads have been left in tatters by decades of civil war. Big hopes are pinned on a new US-financed highway from Juba to the Ugandan border, seen as a boon for the local economy.
Archive
Share this article:
Facebook
Twitter
Google+
Visit us:
Facebook
Follow us:
Twitter
Permalink:

Part of the 192 km Juba-Nimule road constructed with support of the Obama administration through the United States Agency for International Development-USAID. 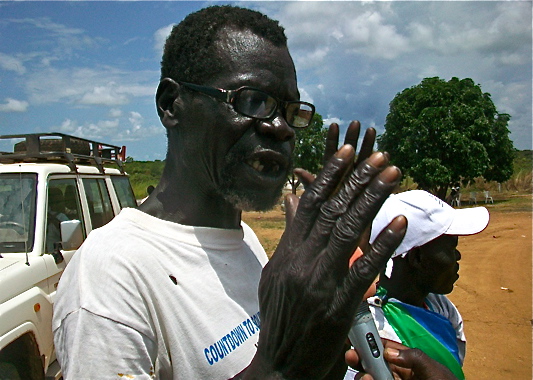 Peter Ladu, living along the Juba-Nimule road, says awareness on road safety should be prioritised to prevent accidents that could claim many lives .
© The Niles | Akim MugisaIt is the longest stretch of tarmac built since the signing of the 2005 Comprehensive Peace Agreement. The government hopes the highway will improve trade and commerce and boost cooperation with East African countries.

Patients can reach the hospital in Juba faster and safer now. Women about to give birth can get to hospital on time. When the road was bad, some women gave birth on the way and many babies died,” said John Muye who owns a clinic in Kit area.

Tomson Amoko, a Hardware store owner in Pageri, says it will help business, slashing his travel time from eight to three hours.

Paid for by the United States’ development arm, USAID, the road snakes through Central and Eastern Equatoria states connecting upcoming urban centres such as Nesitu, Pageri and Kit.

Locals along the highway that links South Sudan to neighbouring Uganda have already named a trading centre Obama, after the US President. 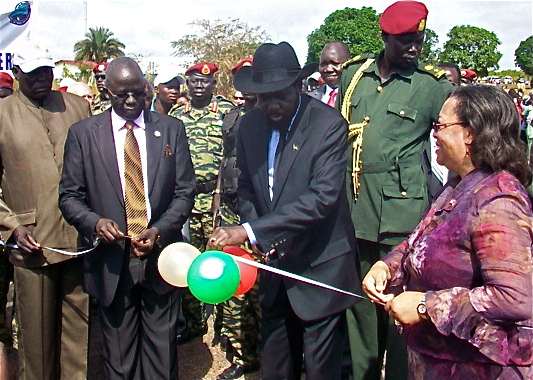 Kiir (centre) cuts the ribbon at the commissioning ceremony. Roads and Bridges minister Gier Chuang Aluong (left) and US Ambassador Susan Page (right) witness the opening on September 12.
© The Niles | Akim MugisaPresident Salva Kiir described the American government as a midwife” for the new country.

These are our friends and they will be our friends for good. We must make sure this relationship is sustained,” Kiir told a gathering of envoys from Kenya, Uganda, and the United States.

The president said Nimule and Kaya border points were key potential sources of revenue for South Sudan. He also cautioned customs officials against corruption, saying that the fees charged for using the highway would be used for maintenance.

The United States ambassador to Juba, Susan Page, described the multi-million project as a symbol of the young nation’s promising future.

She said her government had also donated a dozen motorcycles for the Highway Traffic Police.

Traveling by road is fraught in many parts of South Sudan. In the Greater Bahr el-Ghazal and Upper Nile many areas are still inaccessible due to flooding during the rainy seasons. 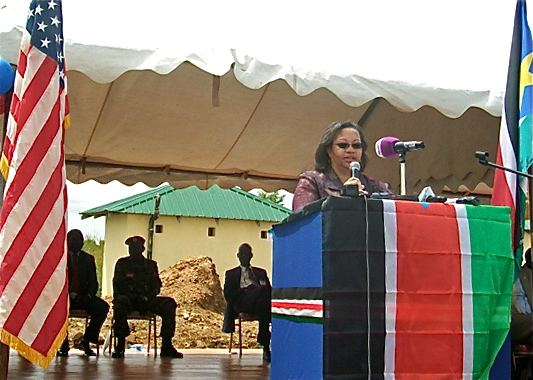 US Ambassador to South Sudan, Susan Page described the Juba-Nimule road as a symbol of promise for the future of South Sudan.
© The Niles | Akim MugisaIn September, 12 people drowned in the River Luri when their Land Cruiser was washed away at a dilapidated bridge along the Yambio-Juba route.

According to Roads and Bridges minister, Gier Chuang Aluong, development of the road network in the country remains among the government’s priorities.

He affirms plans of constructing Kaya-Yei-Juba, Juba-Bor-Malakal-Renk and Juba-Rumbek-Wau-Aweil and Bentiu roads for interstate connectivity.

The minister says about US$ 15 billion is required to develop a road network of 12,000 km in South Sudan, currently squeezed by wide-ranging austerity measures.