Hou Akot Hou
Heavy rains continue to crush crops and displace hundreds of South Sudanese in the state of Northern Bahr el-Ghazal. Those who recently fled the rains have been relocated but continue to suffer without food and shelter.
Archive
Share this article:
Facebook
Twitter
Google+
Visit us:
Facebook
Follow us:
Twitter
Permalink:

A flooded homestead in Aweil, September 4.

700 of those displaced by heavy rainfall have been relocated to Udhapa but they are struggling to survive without food and amid the risk of water-borne disease. The displaced people mostly hail from Makuac-Awiit, a village near Aweil. 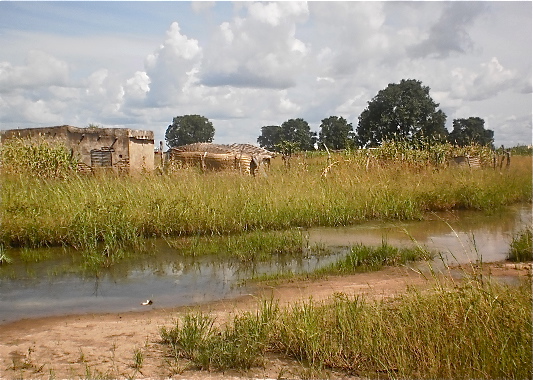 Vast areas in and around Aweil are flooded due to recurrent heavy rains, September 4.
© The Niles | Hou Akot HouRebecca Amaan Flous, who left her home amid the extreme seasonal rainfall, said that they arrived a week ago but still have not been given food or proper shelter.

Some people sleep on the main road and some are setting up their Tukuls [local hut] made of plastic sheeting,” she says, adding that they lacked water and toilet facilities.

Akuol Aguek, who is also at the site, highlighted the plight of the large number of sick children. Many are suffering from dysentery and other serious illnesses caused by the flooding.

My child is severely ill here,” she said. After three days she still has not recovered from her fever. We have spent three days without food.”

Aid agencies including the International Organisation for Migration (IOM) have started distributing plastic sheeting and other relief items to the displaced people. They seek to stem the spread of water-borne diseases.

We have spent three days without food.”
Akuol AguekDisplaced people at the site are calling for relief supplies to be fairly distributed. They urge aid workers to pay special attention to vulnerable people including the elderly, pregnant women and children.

Politicians this week have called on the State Coordinator of the South Sudan Relief and Rehabilitation Commission (SSRRC), and the State Minister of Physical Infrastructure, Ayii Bol, to outline how they plan to help the flood victims.