Local law makers under fire for failing to deliver

The clash shines a spotlight on South Sudan’s near-impossible task of providing for its people as its economy continues to tank.

The community of Cuiecok Payam in Rumbek East County has criticised law makers for failing to deliver on their campaign promises.

At a meeting organised by the Sudanese Network for Democratic Elections, locals challenged their politicians. 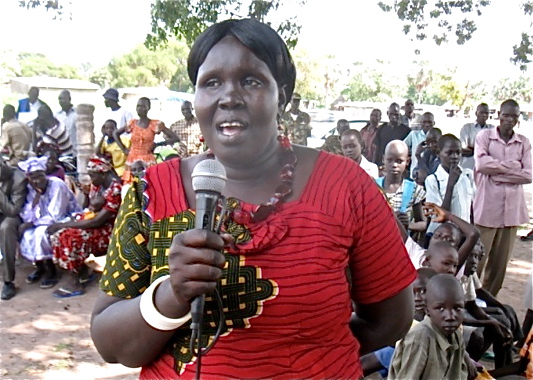 Yar Ater Toric.
© The Niles | Benjamin Majok MonYou told us under this tree in 2010 that if you are elected into the parliament, I will bring clean water, clinics, roads and schools to this region, but where are they now?” Zachariah Matur Meen asked.

They complained about poor standards of education, saying many children were not attending schools which were often far away and understaffed. Meanwhile, few teachers were paid, with most staff working as volunteers.

Yar Ater Toric, a politician representing Rumbek East, defended her party’s record, saying their hands were tied given the economic slump and upsurge in violence.

You have seen and heard that we are being bombed everyday by Khartoum government and our oil has been shut down‚” she said. We have no money to improve development.”

She urged her irate constituency to be patient, insisting things will work out in the near future”.