Akim Mugisa
South Sudan is grinding to a halt amid a lack of reliable power sources. The government is looking for new energy sources to fill the gap, although it lacks the funds to kick-start new projects.
Archive
Share this article:
Facebook
Twitter
Google+
Visit us:
Facebook
Follow us:
Twitter
Permalink:

A businessman in Juba tries out an old generator he uses for lighting and refrigeration.

Petrol and diesel engines and impromptu wires are a common sight across South Sudan, as people struggle to power their lives and businesses.

Companies selling generator sets, spares parts and petroleum products are profiting from the shortage, whereas consumers, are shouldering the rising cost of obtaining electricity.

In Juba and other urban centres, it has become the norm for prospective tenants of middle or high class neighbourhoods to inquire if the accommodation has access to a generator. 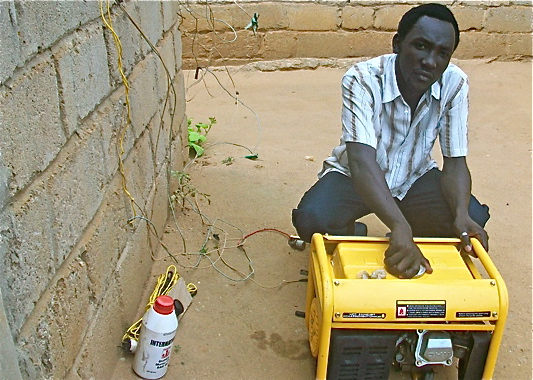 Nelson Charles and his small generator in Nyakuron residential area, Juba.
© The Niles | Akim MugisaNelson Charles, a resident of Nyakuron, has a small generator but says it cannot provide him with all the energy he needs at home. I only use it for lighting and watching television. It is small and I am not able to use it for ironing or cooking,” he explains. It is expensive because I have to repair and refill it frequently. I am affected whenever there is fuel shortage in town.”

The pitfalls of using thermal generators affect industrial and domestic users alike. As well as high maintenance costs and a scarcity of fuel, there is the risk of fire that destroys property and merchandise in homes and markets. Juba’s leading market, Konyokonyo has more than once been gutted by fires, reportedly caused by faulty power engines and poor connections.

South Sudan’s Electricity Corporation is struggling with gigantic fuel guzzling generators that periodically break down or run short of diesel. It is also hit by consumers failing to pay bills for power supplied.

Amid the background of shortages, the General Manager Ajol Magot says the engines in Juba were designed for Heavy Fuel Oil (HFO) that is imported from East Africa, thus boosting operation expenses. Crude oil is the best option because we are not going to buy from anybody. We already have it here in South Sudan,” explains Magot.

Presenting the 2012/13 National Budget to Parliament in June, South Sudan’s Minister for Finance and Economic Planning, Kosti Manibe Ngai disclosed that the government has earmarked 90 million South Sudanese Pounds (US $20.4) for the Fula hydropower project in Eastern Equatoria State. The government is expected to contribute around a quarter of the funds to the joint venture, with the Norwegian power company NORAD set to inject in the remaining 75 percent. 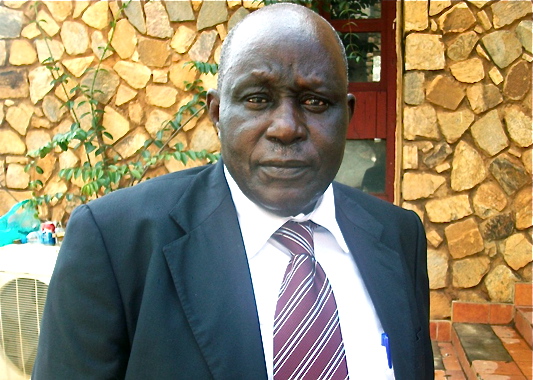 Undersecretary in the Ministry of Electricity and Dams in Juba, Lawrence Loku Moyu.
© The Niles | Akim MugisaHowever, the project does not solve the country’s short-term problems. It will take five years before the site is completed and can produce its first unit of power of an estimated 40 mega watts.

The Undersecretary in the Ministry of Electricity and Dams Lawrence Loku Moyu acknowledges the need for an immediate short term intervention to fill Juba’s demand gap.

Moyu says his ministry aims to meet the nation’s power requirements but must first locate the relevant resources, for example, by analysing the viability of renewable energy sources.

More about hydropower projects in Sudan: "Nubians struggle to keep their culture above water" by Reem Abbas Shawkat

But there is no single solution to South Sudan’s energy needs. With the proposed Fula hydropower project, for example, Moyu said the demand of the Eastern Equatoria towns of Nimule, Torit, Pageri and Magwi, as well as energy lost during transmission, could greatly reduce the amount of power available to Juba.

Despite the expense of photo-voltaic (solar energy) equipment, the government was considering it as a source of electricity for rural schools, health centres and administrative units, he said.

A solar energy expert, Ater Yuot, pointed out that more than 90 percent of the population in South Sudan is living without electricity. He argued that the daily average of seven hours of sunshine would help shrink existing power gaps.

Yuot said that solar panels’ 15 year life span means they can offer an effective solution although their high initial cost remains an obstacle. 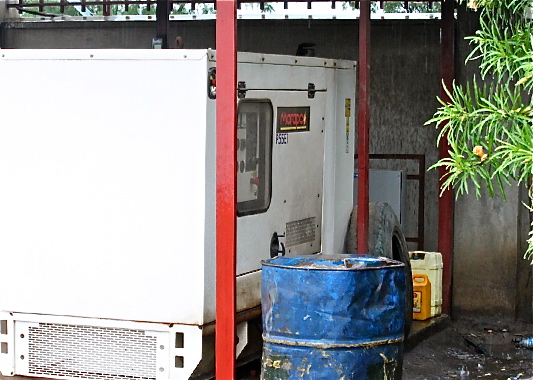 Government institutions, NGOs and bigger businesses that can afford generators are hard hit by high maintenance costs.
© The Niles | Akim MugisaAuthorities say private/public power partnerships are hindered by financial constraints, such as investors’ conditions that the government produces a cash payment of 15 percent before projects can start.

Some argue that the country should make the most of its oil supplies. Marco James Keueck, an electrical engineer at Sudd Petroleum Operating Company (SPOC), for example, advocates crude oil power generation, which he says can be set up within 14 months.

Keueck, whose company runs a nine Megawatts power station at Tharjath, south of Unity State capital Bentiu, says the system can produce large amounts of power on a 24 hour basis, unlike diesel generators, and intermittent sources like solar and wind energy.

The "Power Q4 2012" report by Business Monitor International highlights: "South Sudan’s lack of infrastructure, added to a legal framework that is at best embryonic, has so far discouraged potential investors.

The engineer said that crude oil means that power consumers can pay as little as 0.341 SSPs per unit (Kilowatt/hour) compared to the current cost of one South Sudanese pound for the same quantity generated by diesel.

South Sudan is an oil producing country. It can widely and easily be distributed using pipelines and tankers‚” he says, adding that the system also has disadvantages including carbon-dioxide emissions and the risk of environmentally destructive oil spills.