Hou Akot Hou
Although locals have been seeking a solution to the problem of cattle raiding, and the violence that often follows it, for months, it is still on the rise. Locals discussed the issue at a recent conference.
Archive
Share this article:
Facebook
Twitter
Google+
Visit us:
Facebook
Follow us:
Twitter
Permalink:

Youths look on as the facts of cattle theft are discussed.

More than 250 locals, including officials and tribal representatives, gathered in Wanjok, a town in Aweil East County, in the South Sudanese state of Northern Bahr el-Ghazal, recently to discuss problems with cattle raiding in the area.

Cattle raiding has been the cause of much conflict and violence in the area and has been on the rise, particularly where there are auction markets for animals. And the conference, which included local chiefs, youth group leaders and representatives of women’s groups, gathered to discuss how to prevent cattle raiding from increasing further. 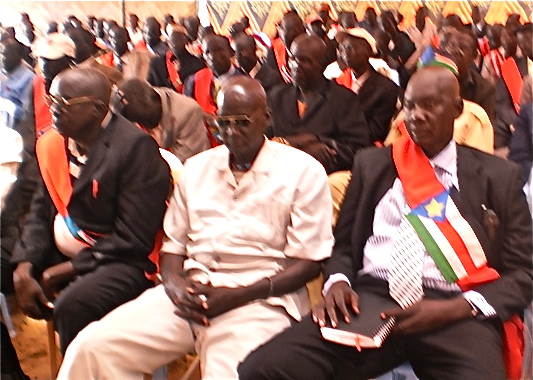 Attendees at the conference in Wanjok, a town in Aweil East County.
© The Niles | Hou Akot HouI asked these people to come so that we could sit together as administrators, citizens, and chiefs to discuss the problems caused by cattle theft,” the Commissioner of Aweil East County, Awet Kiir Awet, says. Kiir also pointed out that much of the cattle rustling was being committed by men from two neighbouring states of Warrap and Northern Bahr el-Ghazal.

During the conference, the participants suggested various ways of catching the cattle thieves, how to bring them to justice and what appropriate punishments might be.

Chier Marol Ruai, a community leader from Twic County, proposed that anyone travelling from town to town with cattle be asked to identify themselves and their cattle.

If the owner of the cattle reaches a village he or she would be required to provide information to the local chief in the village,” Marol says. They should give details of where they are coming from and how many are in their group.” Often cattle raiders travel solo, Marol notes. 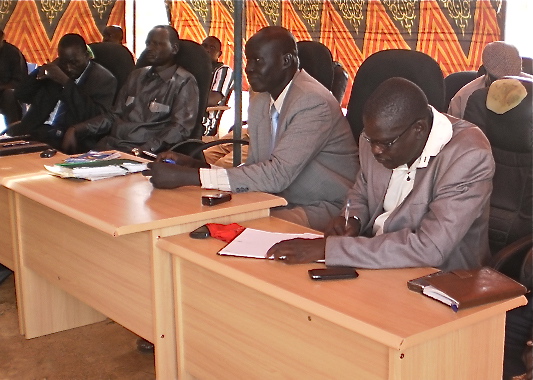 Deliberations continue at the conference where various suggestions on how to resolve cattle raiding were made.
© The Niles | Hou Akot HouMarol also proposed far stiffer punishments for anyone caught raiding cattle. In the past, a conviction might see the perpetrator imprisoned for six years as well as heavily fined. However recently, Marol says, cattle raiders have been involved in murder as well, which means punishments should be more severe. Marol went so far as to suggest capital punishment in some cases.

The gathered attendees also formed committees tasked to look into various local cases of cattle raiding, within their own communities. The leading administrators there also urged locals to continue to meet and discuss the subject and to encourage peaceful resolutions to cattle raiding.

The conference was organised by AECOM, a Fortune 500 firm that provides professional technical and management support services around the world, as part of the USAID-funded Sudan Transition and Conflict Mitigation Programme.