“We fight for the impossible”

Q: Mr. Salih, you are the most experienced editor-in-chief in Sudan and have been working for more than 70 years as a journalist. Do you ever regret your choice of profession?

A: At the beginning, I didn’t consider journalism as a profession. Those days, Sudan was a relict type of colony under Anglo-Egyptian rule and under colonial rule, the press is an advocacy tool. I come from a working class family and wrote my first article at the age of 12. I later joined a Marxist group and became one of the leaders of the student movement. 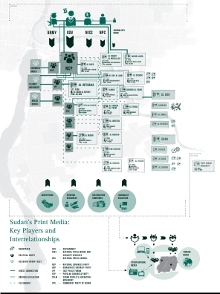 For more background information get a free download of MICT's study "The Sudanese press after separation: Contested identities of journalism"

Q: So your professional aspirations were initially politically motivated?

A: We wanted to get across to the people our wishes for the future. Journalism to me was a way to express my political views specifically for liberating the country from foreign rule. So that’s why I became a journalist.

Q: Expressing political views under colonial rule – this sounds like a mission impossible.

A: Several people were imprisoned. I went to jail because I took part in demonstrations but also because I was a junior reporter. At that time, it didn’t take much to get incarcerated.

Q: One must not even go back to the colonial era. This year, the Sudanese press reported the temporary suspension of the dailies Alwan, Al-Tayar and even Akhir Lahza. Many journalists have been detained. Isn’t working in this profession just like tilting at windmills?

A: Absolutely not. The strength of the press in Sudan is that it affects the public opinion, the discourse, and those who make the decisions – despite confiscations and political repression. The majority of Sudanese are illiterate and they’d rather listen to the radio. But for the elite, the press is a major point of reference. And as such, it is looked upon by the ordinary man as a very important organ in his hands, reflecting his views and educating him.

Q: Balance and education – is this also the philosophy of your newspaper Al-Ayyam?

A: Definitely. I think what makes our newspaper special is the different types of views people find in it. We try to address issues in depth and in a very open manner. I think people who read us look for that. And I believe that this was one of the privileges of Al-Ayyam since it started in 1953. We are broken, but outspoken and very good. This combination is important.

Read also the interview with Nhial Bol about the situation of the press in South Sudan:   "I’m not radical, I’m flexible”

A: I was over 60 years old by that time, so I relaxed a bit. No, seriously speaking, I think good journalism needs to be credible. You have to cover all events and views, even those you don’t like. But you are free to express your views decently and correctly, whatever they are. You can go against the government 100 percent, but you can’t accuse persons for things they haven’t done. That’s why we need investigative journalism in Sudan, more than ever before.

Q: But investigative journalism implicates the unveiling of a hidden truth, which leads to the question of access to information.

A: Freedom of information is definitely lacking in the shape of the Sudanese legal framework. We need a law that demands that everyone who runs an institution, private or governmental, must make information available. We suggested a law to this government five years ago and they didn’t do it. We don’t expect them to do it. We know it is impossible, but we fight for the impossible. 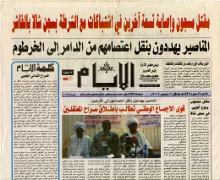 A: Al Sudani recently published an article about a government official who broke the rules through his business links. The government issued orders to prevent us from commenting on this affair because the guy is under investigation. We continue fighting for our right to report on this case. Being under investigation should not mean we stop publishing. So it is possible to have investigative journalism, but I would say that it is difficult.

Q: Looking at the Sudanese newspaper market, the variety of publications seems to underpin your argument.

A: This is not a unique phenomenon for Sudan. Whenever you have a dictatorial regime, the society is closed down. But as soon as it begins to open up a little, the right to express yourself becomes predominant, because people have been kept silent for such a long time. This happened in Eastern Europe, after the fall of the communist system. This happened in Iraq after Saddam Hussein as well.

Q: So, going back to my initial question: Have you never thought of giving up and becoming a doctor or an engineer instead?

A: I decided to stay in journalism with all of the ups and downs. It has never been lucrative, it is even a poverty profession, but I persist.

Mahjoub Mohamed Salih is the editor-in-chief of Sudan’s second oldest, independent and liberal daily newspaper, Al-Ayyam. He was born in 1928 and his first articles were published in 1940 in the pupil’s section of the daily newspaper Sawt Al-Sudan. After studying at Gordon College, he founded Al-Ayaam in 1953, a daily newspaper that was shut down twice by the Sudanese authorities during the 1960s, leading him to become an editor for the English newspaper Morning News and work as a correspondent. During the Nimeiry Era, (1969 – 1985), he was a stringer for newspapers outside of Sudan. Al-Ayaam was closed from 1989 to 2000 and again from November 2003 until January 2004 for covering the war in Darfur. Salih was imprisoned several times for his coverage of critical topics.