The Bentiu Independence Stadium filled with citizens to celebrate the country’s first independence anniversary on July 9.

In his speech Gai appreciated the role played by different countries to bring independence to South Sudan. We salute the friends of the United Kingdom, Italy, Norway and the United States. They must continue to help us in reaching a peace agreement,” Gai said, referring to the high tensions between South Sudan and Sudan. 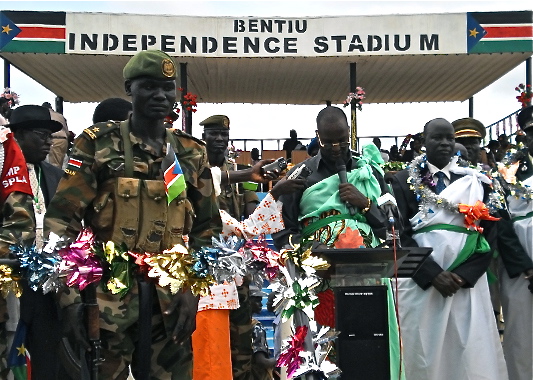 Unity State Governor Taban Deng Gai addresses the audience during the celebrations in Bentiu, July 9.
© The Niles | Bonifacio TabanWe are capable to defend our national integrity and Panthou East (Heglig) shall remain part of South Sudan,” he added, as both countries claim the oil-rich area as being part of their territory.

Kuol Jial Bigot, the Deputy Chairperson of the Employee’s Justice Chamber in Unity State said that South Sudan, though independent, still faces many threats”. Bigot urges  that more effort needs to be put into development, agriculture and infrastructure, as these will be the pillars on which the nation can be build.

According to Bigot the government needs to eradicate challenges that prevent the country’s growth, which will allow the people to overcome the current economic crisis.

John Thokwath Koang, the chairperson of a cultural group performing at today’s celebration said that the April attacks on South Sudan’s territory by the Sudan Armed Forces (SAF) are the reason why the people of South Sudan wanted to be independent. If people come to attack South Sudan, then it is a violation of our sovereignty.”

Of course I feel proud. Since 1983 SPLA has been fighting, I’m happy with the SPLA for what they have done during the invasion from the north,” Koang added.

In April the two Sudans came close to all-out war. Clashes between Sudan and South Sudan, along the disputed border of the two neighbours intensified, Heglig and Unity State being two flash points.

Sudan and South Sudan are yet to resolve several contentious post-independence issues, a dispute over oil revenues and border demarcation being the two most critical ones.

The CPA also provided for a referendum on secession which took place in January 2011. People overwhelmingly voted for secession, giving way to South Sudan’s independence on July 9 2012.