Mark Nyipuoch head of the delegates speaks to reporters after a rally in Aweil.

A national delegation traveled to Aweil on Wednesday July 4, in a bid to bridge the rift between the executive and the legislature.

The speaker Aguer Wol Aguer has been banned from Tuesday’s attempt to restart the assembly. He is under pressure following a letter from some members of the state assembly, alleging that the speaker is not suitable for his post. 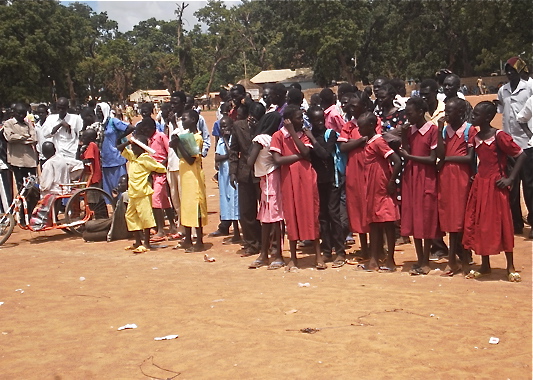 Residents listen to delegates in Aweil.
© The Niles | Hou Akot HouThe state assembly and executive are at loggerheads over the issue and some members of parliament have alleged the speaker is tainted by ineffectiveness and corrupt practices.

The speaker has vowed to step down in the case of a parliamentary vote of no confidence.

Member of the National Legislative Assembly Mark Nyipuoc Obong is leading the Juba delegation and aims to visit state officials and members of parliament to try to calm the situation and inform local residents about the SPLM’s Programmes.

The leadership of the SPLM needs to return to the grassroots and thank the people for having chosen freedom and exercised the right of self-determination in referendum which gave birth to South Sudan. The people made great sacrifices during the liberation struggle,” Nyipuoc Obong told journalists.

Urging the state assembly and the executive to work together, Nyipuoc Obong said their team will hold open public rallies across the region. He wants to provide information about the SPLM program given the difficult era following the oil shutdown at the start of the year.