Female students in South Sudan: ‘Our parents look at us and see cows’

Majok Mon
South Sudan has one of the lowest literacy rates in the world for women and barely any girls finish their education. Female students at a Rumbek County school tell The Niles why this may be.
Archive
Share this article:
Facebook
Twitter
Google+
Visit us:
Facebook
Follow us:
Twitter
Permalink:

Our parents look at us and see hundreds of cows,” says Winny Nyilueth Athian, an eighth grader at Deng Nhial school in Rumbek County, central South Sudan; in South Sudan, eighth graders are around 18 and the cows this student is speaking about are the dowry parents receive for marrying off their daughters. They see the education of girls as of little use and they also think schooling devalues their cultural beliefs,” she explains.

Even government officials seek their wives among those women who didn’t finish their education,” Athian complains. That’s why there’s little attention paid to female education in South Sudan.” 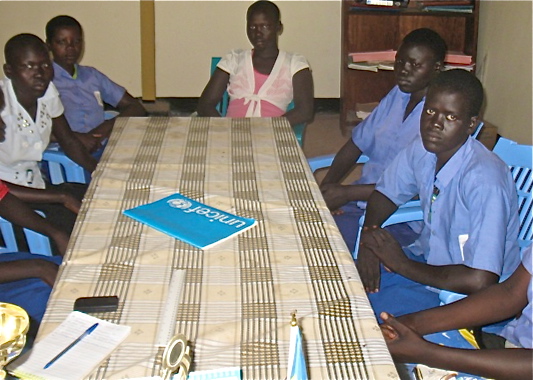 Students at Deng Nhial school in Rumbek county. © June 2012 The Niles | Benjamin Majok MonIn a report from June 2011, UNICEF notes that South Sudan has one of the lowest literacy rates for women in the world, with almost 90 percent of females thought to be illiterate. Hardly any women make it into the last grade of secondary education in South Sudan. Today, a young girl in South Sudan is some three times more likely to die in pregnancy or childbirth than she is to get eight years of basic education,” the report says.

Another student at Deng Nhial school, Elizabeth Convoy Machar, adds that parents believe that if a girl goes to school she is in danger of becoming sexually promiscuous. And our education will not progress if our parents suspect we are going to become prostitutes at school,” says the fifth grader at Deng Nhial school.

Most of our friends have been taken out of school and married,” Machar continues. There is nothing in Lakes State that protects the rights of girls in schools.”

If a girl gets pregnant before she is married -- for example, while she is still at school -- her family won’t be able to marry her off and they will then miss out on the expected dowry of dozens of cattle. Early and forced marriage are still common and if a girl refuses to marry, she may well be beaten by her family.

Also read: ‘We run home when it rains’: South Sudan’s classroom-less childrenKedit explains that this is because cows are simply a more important priority in the culture of a pastoral people.

The female students’ head teacher verified all of this. Parents look at girls [and their dowries] as a source of wealth -- that is according to the culture of pastoralist communities,” the head of Deng Nhial school, Zachariah Bol Jalab, says.

Three girls left school last year in order to marry, Jalab confirms. One was in the eighth grade and her dowry added up to 110 cows and the other two were in the seventh and sixth grades with their dowries fetching 84 and 58 cows respectively.

As to whether the school could do anything about the situation, Jalab says, it’s complicated. The school does not prevent the girls from leaving to marry because staff are well aware of the cultural attitudes that bring about the departures; preventing them would also bring them into direct conflict with the girls’ parents’ wishes.