With the parliaments approval to remove the subsidies on fuel last week, the governments’ decision has become effective and be enforced promptly.

During the past period, MPs could not reach a consensus on abolishing fuel subsidies, given its detrimental economic and political consequences on the country in all aspects of life. 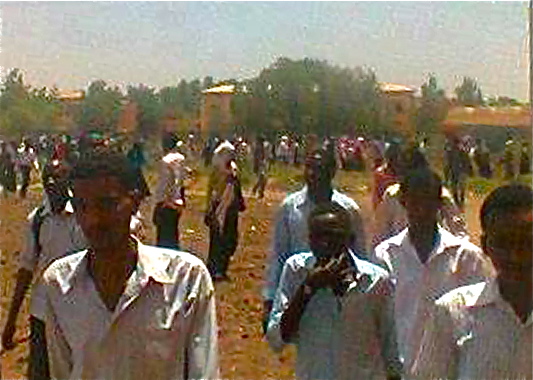 On Monday June 18, Khartoum University students united to protest against high prices.
© The NilesFor the time being, the citizen won’t be able to tolerate an additional price increases of vital goods, as prices have already multiplied several times over the past months following the country’s oil revenue loss.

Observers as well predict catastrophic consequences on the life of citizens and major impacts on the overall political and economic situation in Sudan.

This decision was submitted by the Minister of Finance, Ali Mahmoud, few months ago to address the deficit in the state budget, which had lost its major revenue source, following the South Sudan’s secession July 9, last year.

At first, the decision was fiercely opposed by MPs, including those representing the ruling National Congress Party (NCP). Many economists advised the Ministry of Finance and the government of Sudan to find alternatives to address the deficit of the general budget, including: limiting the lavish spending of the government, reducing the federal government staff from 120 and 20 ministers, reducing the number of state governments, and decreasing the spending.

Further, there were other proposals, such as a significant shift to agriculture, opening real productive fields, opening doors for investors in serious production processes and suspending investment in consumer fields. Yet, it seems, the Ministry of Finance has not really discussed these suggestions.

According to the BBC people in Khartoum chanted people want to bring down the regime” on June 18. The security forces used tear gas and sticks to disperse the crowds. A number of government vehicles were burned at around 3:30 pm, June 18, according to one of The Niles correspondents in Khartoum.Having felt the rejection and hesitation from some MPs toward his decision, the Minister of Finance resorted to the NCP lobby seeking its support, which forced MPs to approve the decision. As the majority of MPs are affiliated to the NCP, the decision was passed, despite the rejection by others.

But the Minister of Finance, NCP members, and MPs seem to miss an important component, the citizens of the Republic of Sudan, who will bear the greatest burden represented by a massive increase in prices caused by abolishing Sudan’s fuel subsidies.

The decision will cast a shadow on the overall political and economic processes in the country. Observers predicted the possibility that this decision might push the Sudanese to take their anger to the streets, expressing their rejection of the government’s decision.

Since Saturday, June 16, this prediction has become a reality. Students at Khartoum university started protesting on the university’s campus. Sunday and Monday protests spread across Khartoum and the coming days might show the extent to which the Sundanese citizen is willing to denounce the government and its decisions.