MTN mobile money goes global” reads the tagline of a recent advertisement that has blanketed many cities, especially in Africa, touting the mobile telecom company’s new, easy way to send and receive money.

Although there is a lot of excitement among MTN’s customers, the new service has come at a high cost for some. 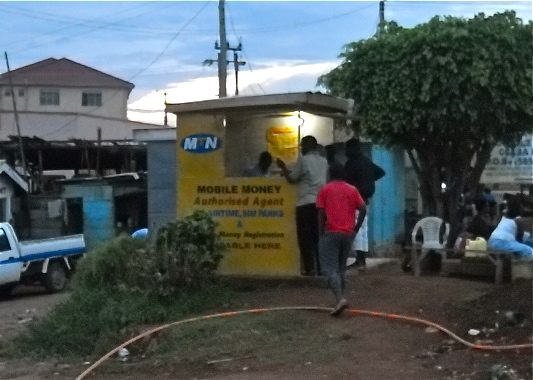 An authorised MTN agent in Kampala, May 2012.
© The Niles | Ochan HanningtonSuzan Dawa, a South Sudanese student living in Kampala, Uganda, was a victim of fraud when she tried to use the service. She has vowed to never use MTN again because she is frustrated with the way the company handled the problem. MTN has not helped me recover my money,” she says.

A few weeks ago, Dawa’s sister in South Sudan sent her the equivalent of $100 using MTN’s mobile money transfer service. When Dawa went to collect the money, she discovered that it had been already been collected by someone else at an authorised MTN Agent Point.

The terms and conditions of the mobile money transfer services state that the mobile phone service provider, MTN, is responsible for debiting or crediting the mobile phone account designated by the customer. All debit transactions must be authorised by a PIN which is issued when the customer registers.

When contacted, MTN’s Public Information Centre provided the time and phone number of the person who collected Dawa’s money. When the phone number was tracked, an MTN administrator confirmed that it was one of their authorised agents operating in a Kampala suburb who collected the money. The agent, who was only identified as Paul, has apparently been stealing money from the company’s external customers.

When asked why the agent was not turned into authorities, the administrator responded that we penalise any agent who is involved in fraud by making them pay some money”. The administrator also said that Paul” and some other agents have been involved in other instances of fraud.

Two weeks later, Dawa has still not recovered her money. I’m disappointed with MTN. I will never use MTN mobile money services again my entire life,” she says. 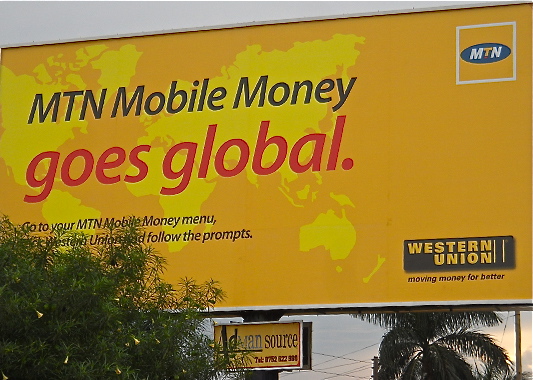 MTN mobile money goes global” advertisement in Kampala, May 2012.
© The Niles | Ochan HanningtonDawa has travelled to the MTN centre many times as well as to the office where the fraud occurred, hoping to recover her money. However, every time an administrator at the centre sends her to an agent to get the money, the agent never shows up. In the process, Dawa has lost more time and money.

An MTN area supervisor, who asked to remain anonymous, said she is trying hard to recover the money. Apparently, the fraudulent agent, Paul, rarely answers his calls. These guys can be tricky some times,” the supervisor says.

The area supervisor says that MTN cannot provide much help to customers who have not registered and don’t have pin codes. Such customers become easy prey. Many of our customers are being conned on a daily basis by some deceitful agents,” she says.

Other victims of fraud, who cannot be as persistent as Dawa, do not have the time to pursue the issue until their money is recovered. Sometimes none of the money is recovered, and the case is closed. Still others may decide not to take any action when they are conned out of their funds.