The Governor of Unity State, Taban Deng Gai, addressing the press after the official SPLA Day celebrations in Bentiu (16.05.2012).

Unity State Governor Taban Deng Gai expressed his gratitude to all the people of the Republic of South Sudan for their commitment to achieve the country’s independence during today’s commemoration ceremony.

Over two million people died in the civil war between the Sudan Armed Forces (SAF) and the Sudan People’s Liberation Army (SPLA), which led to South Sudan’s independence on July 9 last year.

Gai says that all South Sudanese should be proud of their lost brothers, sisters, mothers and fathers, who fought and lost their lives for the country’s independence. 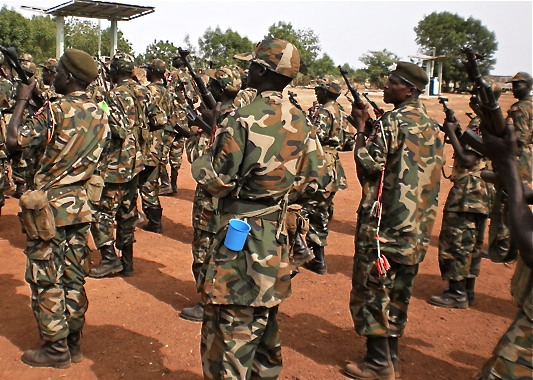 SPLA soldiers in Bentiu during the SPLA Day celebrations (16.05.2012/Bonifacio Taban).Today, May 16, is a very special day, the day that we have decided to fight”, Gai says, in order to achieve our objectives and democracy for our people”.

The Governor however added that May 16, 1983 was not the actual start of the struggle, but a continuation of earlier struggles and the day of the actual formation of the Sudan People’s Liberation Movement/Army (SPLM/A).

Was it not because of the blood of our heroes who died during the struggle, we would not have freedom at last as people of South Sudan,” Gai explains.

Liah Puot, a citizen of Unity State, says that only this last struggle, which started on on May 16, brought peace, freedom and independence to South Sudan.

23-year-old Angelina Nyakan Babuoth is proud of the SPLA and the struggle that brought sovereignty to the Republic of South Sudan. The SPLA has struggled for our freedom and we, the young generations, will always keep this day in our memory.”

In view of the recent escalation between Sudan and South Sudan, many South Sudanese today as well expressed their appreciation for the work of the SPLA, in defending” South Sudan’s territory from a foreign invasion.