An internally displaced woman waiting for assistance in Jaac (01.05.2012).

On Tuesday the International Committee of the Red Cross (ICRC) located a new group of Internally Displaced Persons (IDPs) in Jaac Payam, Aweil North County. The IDPs fled their homes following the recent clashes between the Sudan Armed Forces (SAF) and the Sudan People’s Liberation Army (SPLA) along the border of Sudan and South Sudan.

South Sudan and Sudan have yet to resolve their post-split disputes, which with growing tensions can lead to a full-scale war.

According to the ICRC’s initial report 15,000 people were displaced in the area. Another aid agency visiting the area on Wednesday, May 2, however estimates that the number of IDPs is close to 5,000.

One of the IDPs, Santino Maraac Yai, says they fled their homes in Makuei, Kak-adeet, Galama and Simsim about ten days ago when one of the villagers was killed by Arab militia” at river Kiir (Bahr Al-Arab).

Several aid agencies and the United Nation Mission to South Sudan (UNMISS) conducted a rapid emergency assessment on Tuesday, May 1. Most of the IDPs are in a deplorable situation, lacking food, water and shelter according to the assessment. Among the IDPs are many mothers with babies and children who suffer from malnutrition, diarrhoea and malaria. 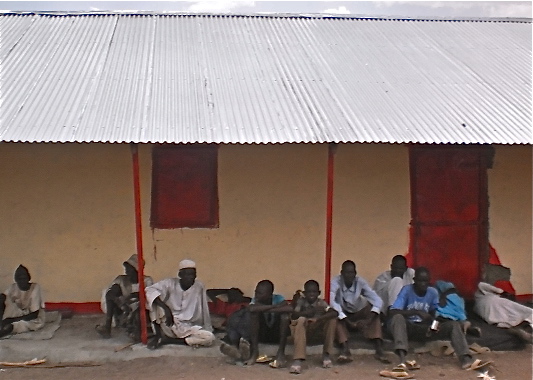 A school in Jaac serves as a shelter for the IDPs (01.05.2012/Hou Akot Hou).Our life situation is bad,” Yai says. For the past ten days we have nothing to eat and we have some vulnerable people amongst us”. According to Yai the Aweil North County authorities have already provided assistance, but we need additional support”. He appreciated the support of the Government of South Sudan (GoSS) and hopes that our lives will be better compared to the time we were at river Kiir”.

ICRC and other aid groups have started to assist the IDPs, but many say the process is too slow. Garang Geng, one of the IDPs, complains that most of the people got distribution cards but failed to get their items. Geng thinks that the influx of some host community members, trying to get their share, hinders the distribution process.

Geng further says that some members of the host community have robbed plastic sheets and other items distributed to the IDPs. We have asked the elders in the community” to ask their people to stop, but they say they don’t know” as the looting takes place at night.

Various aid agencies have agreed to start working in the area, improving hygiene, health, protection and education. UNICEF Coordinator for Northern Bahr al-Ghazal State, Dr. Riiny Lual says they are working to ensure the IDPs get all the necessary assistance based on their critical basic needs. 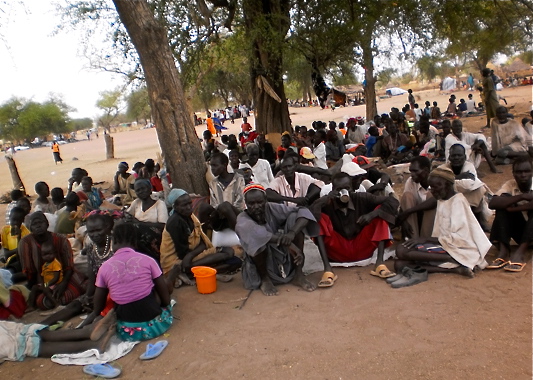 Many IDPs lack proper shelter and seek protection under a tree (01.05.2012/Hou Akot Hou).As UNICEF representative I have seen a lot of children”, who are supposed to go to school. Lual says UNICEF will assess the number of children and the capacity of the schools in the area and respond to the needs arising.

Water and sanitation is another crucial area UNICEF will look into, as there are not enough latrines and boreholes. Together with WHO we will support the Ministry of Health to monitor the situation”, says Lual, avoiding a potential outbreak of diarrhoeal diseases.

Local authorities plan to relocate the IDPs to a new site within Jaac Payam, in order to cater better for all the IDPs, who do not yet intend to return home, as they fear further attacks.