April 6: a reminiscence of a forgotten revolution

During the strong tide of the Arab spring revolutions and before their heyday had turned into the current situation, a number of Arab and international media raised a tragically painful and tormenting question: have the winds of change, aroused by the Arab Spring, overpassed Sudan?

This injurious question is recalling the glamorous revolutionary history of the Sudanese people, who revolted twice in recent history to overthrow the tyrants: the first in October 1964 and the second in April 1985.

Read also: Sudan’s Arab Spring waits in the wings, with no curtain callThis question was also recalling many details deeply associated with the creation of the Sudanese revolution in its utmost manifestations.

In fact, we have lost the taste of change in the midst of the deliberate nation-wide baffling of various political, cultural and economic aspects of the public life.

We have missed the dream of change and thus completely forgotten that last month, 32 years ago, we made a popular revolution,an intifada, against a powerful dictatorship that perched on the chest of the nation for 16 years.

The people overthrew that oppressive junta and we established a democratic system that survived only for a few years, because brutal powers had scrambled to destroy this newborn system.

Examining the Sudanese revolution through another perspective shows that the Sudanese people at an early stage accumulated a huge historic heritage. Yet, they are now unable to accomplish actions that might bring positive change to the deteriorating situation in the country. 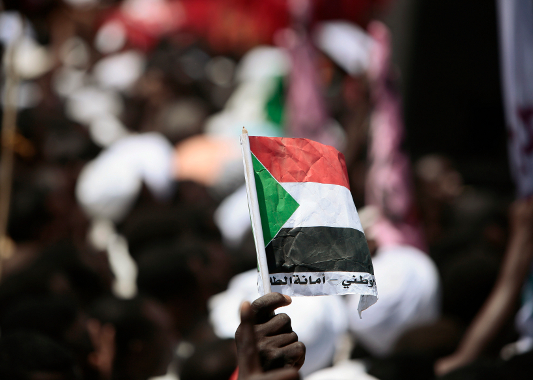 Views may vary according to different intellectual or political perspectives. Some people claim that change should certainly be peaceful and bloodless through the angry crowds in the streets.

Others think that the current regime can only understand the language of the sword and the rifle (SPLM-N and other armed groups provide a good example). Between these two perspectives, the revolution wick is waiting for a flame.

An odd paradox is that the current rulers, after seeing the Islamic movement gain momentum in Egypt, Tunisia and Libya, claim that they themselves triggered the Arab spring revolution on June 30, 1989.

Moreover, this lie has peacefully passed off without being challenged by the makers of the Sudanese revolutions.

The question that the anniversary of April Intifada does raise today is: do we have a third revolution  looming in sight? Or has the Eve of the Sudanese revolution gone sterile and stopped giving birth to revolutionists and revolution detonators?

Prof. Hamad Mohamed Kheir warns that Sudan could explode” at any time if memories of its past revolutions are revived. Continued mistakes, corruption and tyranny will be the reasons,” he says.