The fighting took place late Tuesday between the Sudan People’s Liberation Army (SPLA) and the Sudan Armed Forces (SAF) deployed to a base near Meiram, in Sudan’s South Kordofan State.

The Commissioner of Aweil East County, Awet Kiir Awet, says the fighting broke out when a SPLA soldier was killed by SAF on Monday evening near the Warguet military barracks.

The SPLA did not immediately respond, though their colleague was killed,” Awet says.  When the SPLA tried to find out what happened on Tuesday morning, they were attacked again, according to Awet.

Awet Kiir Awet emphasises that despite this deadly attacks, South Sudan still supports the peace agreement signed between the Misseriya and the Dinka Malual.

The County Authorities were asked by an SPLA commander to contact members of the Misseriya community in Warguet and the surrounding villages, asking residents to remain calm and not to flee the area, as the attacks only target the SAF.

As ground battles continue along the disputed border of Sudan and South Sudan, despite calls by the United Nations (UN) and the African Union (AU) to cease hostilities, locals pack their belongings, cattle and goats, moving to safer grounds,” according to Awet.

So far there is no sign from neither side to step back from the brink of a full-scale war -- on the contrary, both Sudan and South Sudan are mobilizing their forces.

Meanwhile, peaceful protests continue all over South Sudan after the UN and the AU have demanded South Sudan’s unconditional withdrawal from Heglig, calling its occupation illegal and unacceptable”. 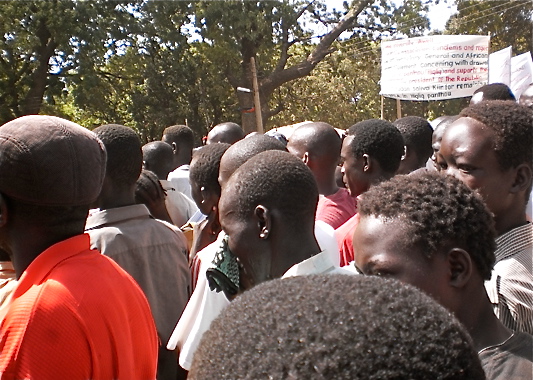 Hundreds of protesters march to the offices of UNMISS in Aweil to express their frustration with the UN and the AU (16.04.2012/Hou Akot Hou).In Northern Bahr El Ghazal State, hundreds of people marched to the offices of the United Nation Mission in South Sudan (UNMISS) to express their frustration about the UN and the AU’s demands.

The SPLA must not withdraw from Heglig. They should remain there. Also the areas that are occupied by SAF, that belong to South Sudan, must be captured by the SPLA,” Adut Deng Tong, one of the protesters says.

Jacob Bol, a student attending the protests says, we want to tell the whole world that we will support the SPLA and we are ready as students to support the SPLA so that all areas SAF is occupying will be under the control of the South Sudan government”.