Following continuous fighting between Sudan and South Sudan in the disputed and oil-rich area of Heglig, Gatluak says that his forces are ready to defend any attempt by SAF to invade their land.

He assures that his forces are in full control of South Sudan border territories. We are under attack in Tachuin since the day of our attack. We assure the citizens of South Sudan that we are here, ready to defend our home land one hundred percent,” James Gatduel Gatluak says.

Swami Khalid, a Sudan Armed Forces spokesperson, repeatedly states that the SPLA was pushed out of the area. He also says that his troops will retaliate against South Sudan over the loss of Heglig. 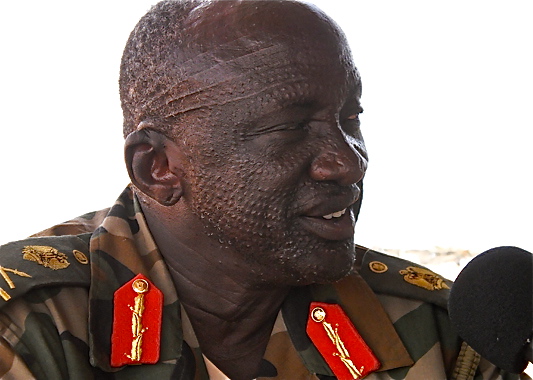 James Gatduel Gatluak speaks to the press at Heglig oil field (17.04.2012/Bonifacio Taban).
The Sudanese government claims ownership of Heglig, based on the 1956 borders, a claim South Sudan officials dismiss. Heglig is the land and home of South Sudanese people,” Gatluak states.

The Government of South Sudan (GOSS) says the area belongs to Unity State, Pariang County and that its original name is Aliny. The area was then renamed by the former Sudanese President Jafer Nimeri and since then holds the name Heglig.

However, a 2009 Permanent Court of Arbitration ruling removed Heglig from the disputed Abyei region. The ruling did not extend to deciding whether Heglig lies in Sudan or in South Sudan. The official demarcation of the international border is yet to be marked after South Sudan's secession last July.

The African Union (AU) and the United Nations (UN) appeal to both, Sudan and South Sudan, to refrain from hostilities, but both states continue with aggression.