Bol Gatkuoth, Gatdet’s spokesman, confirmed that the soldiers of the South Sudan Liberation Army (SSLA) will be moved to Mapel County in Lakes State with the SPLA.

Gatkuoth said the relocation from Unity State is significant because it underscores a clear acceptance of the ceasefire agreement with the SPLA. The transfer is expected to take one week. 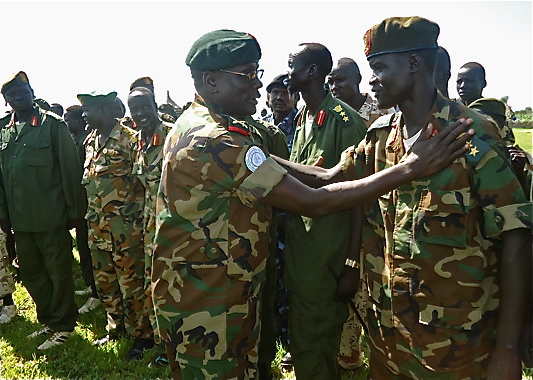 Peter Gatdet signed a ceasefire with the SPLA in early AugustSSLA troops arrived in Unity State in mid-August following Gatdet’s response of President Salva Kiir’s offer of amnesty in exchange for disarmament, which he reiterated when South Sudan officially declared its independence in July.

Unity State has been a place for many rebel movements, but our departure will make it known that the SPLA and SSLA are in realistic peace talks,” said Gatkuoth, and the people of South Sudan shall know we are in acceptance of the amnesty offered by the president of the republic.”

Gatdet had originally defected because he charged the southern Sudanese government of corruption. The new cabinet, said Gatkuoth, is truly showing to our communities that democracy is now beginning,” while adding that many issues remain to be addressed. 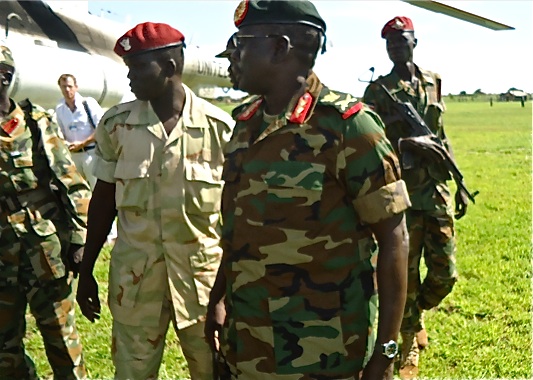 Gatdet with SPLA officers arriving in Mayom with teams from the UN Mission in the Republic of South Sudan (UNMISS)Chief among Gatdet’s concerns is greater ethnic diversity in the national government and stronger leadership skills.

The new interior and finance ministers are from the greater Equatoria region, which was not previously represented. Vice President Riek Machar is from Unity State, which is otherwise not represented in the cabinet.

Kuey Guong, a local chief from Bentiu, appealed to any rebels still in hiding to end hostilities in local communities. Land mine explosions in Unity State continue to threaten the lives of civilians. Two mine blasts in the region killed five last month.

Get the Small Arms Survey update on Gatdet

While major rebel militias loyal to Gatluak Gai and Peter Gatdet have entered ceasefire talks with the South Sudanese government, other forces under Bapiny Monytuel and Puljang Top have yet to respond to President Kiir’s offer of amnesty.

Public response to Gatdet’s reintegration to the SPLA has been largely positive, both within Unity State and abroad.